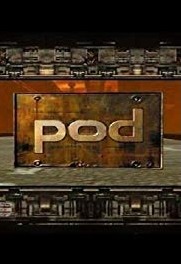 POD: Planet of Death (titled simply POD in North America) is a futuristic racing game for Windows released by Ubi Soft in 1997. The game is set in the distant future on the planet Io. A mining accident unleashes a fungus from within the planet on its inhabitants, causing widespread panic. After most of the population escapes the planet, a few survivors remain on Io, with only one ship remaining. The survivors soup up cars which they race in tournaments, the winner of the final tournament taking the last ship and escaping to safety, leaving the others to die. The music was produced by Daniel Masson.

POD was published in 1997. It was one of the first games to support the MMX instruction set and came bundled as an OEM version with computers using Intel Pentium or Pentium II MMX processors, and some AMD K6 systems. The OEM 1.0 version did not support 3dfx cards or a network mode. A retail version of POD (called POD 2.0 by Ubisoft) was later released and featured more circuits and cars, plus support for 3dfx video cards and network play. A special multiplayer program called "Game Service" was provided by Ubisoft for POD players so that they could race on Ubisoft servers. POD was among the first games optimized for video cards with a 3dfx chipset using the Glide API. Only video cards with the 3dfx Voodoo 1 chipset were supported upon the game's release. Ubisoft later published patches which added support for the Voodoo 2 using the Glide API and non-3dfx chipsets via Direct3D. Less than a year after publishing POD, Ubisoft issued an expansion pack under the title Back to Hell (also known as Extended Time in France) in late 1997. This pack contained 19 circuits and 15 new vehicles including motorcycles, a floating purple batlike creature, and a witch riding a broom.

A port of POD for the Nintendo 64 was announced, but never released.

In the winter of 2000, Ubisoft released the game's successor, POD 2 (also known as POD 2: Multiplayer Online and POD: Speedzone), for the Sega Dreamcast console. It is another futuristic racing game, but players are able to attack their opponents. Each player is a miner on the colony of Damethra, and an alien virus has taken over the cars on the colony, creating mutant cars. It was one of the first games playable on SegaNet, and one of the few games to support the Dreamcast Broadband Adaptor. The game features eight vehicles to use on five tracks. Bonus cars and tracks could be unlocked if the game was played online and the user had a Game Service account, but due to the shutdown of SegaNet these are now inaccessible.

On October 6, 2011, POD was re-released by GOG.com, with added compatibility with modern operating systems.

Next Generation rated it three stars out of five, and stated that "Pod is a fantastic ride, with high-color graphics at high resolution and a steady, high frame rate. It could very well be the prettiest racing game you can buy right now."