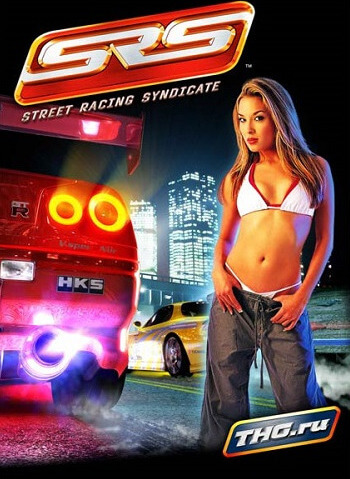 Street Racing Syndicate is a multiplatform racing video game produced by Eutechnyx, and released by Namco on August 31, 2004 for the PlayStation 2, GameCube, Xbox and Windows-based personal computers. The game was also released for the Game Boy Advance on October 4, 2005.

The gameplay takes place in following cities in the United States, including Los Angeles, Miami and Philadelphia, and the races will take place not only in the daytime but also at night.

This game features an underground import racing scene, on which the player's main objective is to live the life of a street racer, gaining respect and affection of various women in the city. This is featured in a way that the player must win a variety of respect challenges to attract girls and maintain a good victory streak in order to ensure that they remain with the player. Once in their car, the girls will present the next open race that the player enters. As the player continues to win races, dance videos will be unlocked for viewing.

The game has 50 licensed cars from a variety of manufacturers, including models from Nissan, Toyota, Mitsubishi, Lexus, Subaru, Mazda, and Volkswagen. SRS also features a car damage model that forces the player to drive carefully, heavy damages may impact car performance and heavy repairs may drain the player of money earned from their last race. The Game Boy Advance version doesn't have licensed car names, lacks police chases and career free roam, and customization is different from other platforms.

SRS initially received publishing support from The 3DO Company. While the game was still in development, 3DO declared bankruptcy and auctioned off SRS along with its other assets. Namco picked up SRS for $1.5 million, compared to the $1.3 million that Ubisoft paid for the Heroes of Might and Magic franchise.