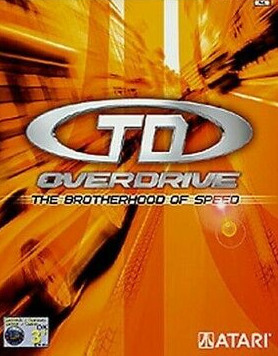 TD Overdrive: The Brotherhood of Speed (Test Drive in North America) is a racing video game developed by Pitbull Syndicate and published by Infogrames for PlayStation 2, Xbox and Microsoft Windows.

Like its previous incarnations, Test Drive focused on illegal street racing, dodging traffic, and evading the police. It also featured real life locations for its tracks: San Francisco, Tokyo, London, and Monte Carlo. A fully playable version of Pong was also included in the loading screens.

However, this was the first entry in the franchise to feature a story mode in addition to the arcade mode. Players took control of a character known as Dennis Black, a San Franciscan street racer. Black races in an exclusive street racing club on the behalf of a fellow racer named Donald Clark, who had been injured during a race. As Black's victories start to amount, he hears rumors from other drivers that Clark is simply using him to beat one of the club's most ruthless racers and win his prized Dodge Viper. After Black wins against said driver, the rumors are proven true as Clark showcases his true colors. Black then challenges Clark for everything that Black has gained over his career, including the Viper. In the end, Black wins and Clark surrenders the Viper. However, it is later revealed that Clark intends to have the Viper stolen from Black, but this goes unresolved.

Test Drive received "mixed or average reviews" on all platforms according to the review aggregation website Metacritic.

(0) Comments on "TD Overdrive: The Brotherhood of Speed Full Version"