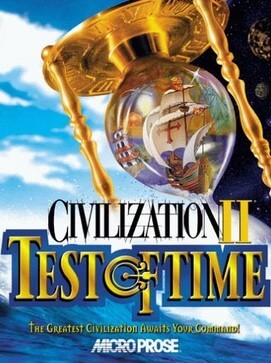 Civilization II: Test of Time, released in 1999, is a turn-based strategy game remake of the best selling game Civilization II that was released to compete with Sid Meier's Alpha Centauri. Test of Time's central innovation was the addition of multiple maps and the inclusion of two campaigns concerning science fiction and fantasy themes.

While the Civilization series had little to no direct competitors, this changed in 1999 when Activision created Civilization: Call to Power. Call to Power was a clone title, which also extended the concept to future space/ocean colonisation. This led to a legal battle between Activision and Microprose, which was resolved with Activision able to make further Call to Power games as long as they didn't use "Civilization" in the title. Microprose's response was to make a spin-off game entitled Civilization II: Test of Time which, like Call to Power, included themes such as the colonization of Alpha Centauri, science fiction, and fantasy. It would later inspire the open-source project Freeciv. This version had its own mods. It was included in the Sid Meier's Civilization Chronicles pack. The Mirror Newspaper in the UK ran a competition wherein they would give away ten copies of the game to readers who correctly answered a history-related question.

The Original and Extended Original campaigns

Test of Time included a version of the old Civilization II campaign, with only a few minor changes. Cosmetically, however, it looked quite different, with all-new art and animated units. Test of Time also offered the option to undertake the Extended Original campaign, which was identical to the Original except that the "pink" slot for a civilization was occupied by aliens on Alpha Centauri. When one built the Alpha Centauri spaceship, instead of ending the game, it unlocked a secondary tech tree and allowed the player to battle the Centaurians.

However, on all versions, the "red" slot for a civilization is always occupied by the barbarians (religious fanatics, barbarians, and guerrillas)

The Science-Fiction campaign focuses around a mostly fictional planetary system in orbit around the real, nearby star of Lalande 21185. The setup is that the humans along with another species identified only as the "non-humans" both crashland on earthlike Funestis, the second planet. The two species eventually learn to talk with each other and expand to the three other maps, which include the orbital platforms around Funestis left there by the ancient Lalandians, a rocky world called Naumachia, and the center of ancient Lalandian culture, the gas giant Nona. Victory can be accomplished by sending a spaceship back to Earth, by building a quantum gate back to Earth, or by conquering the star system.