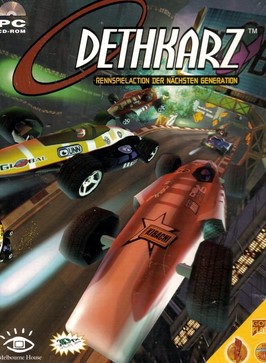 DethKarz is a futuristic 3D racing game by game publisher Melbourne House. It was released for Microsoft Windows in 1998. A Nintendo 64 port was planned but never released.

Next Generation reviewed the PC version of the game, rating it four stars out of five, and stated that "Despite being a shameless rip-off of Psygnosis' Wipeout franchise, Dethkarz is fast, beautiful, and seriously addictive."

GameSpot said for the PC, "Dethkarz follows the futuristic racing formula exactly, without bringing any real personality of its own." GameSpot also rated the game 5.7 (mediocre). IGN said "Dethkarz is just like all the other arcade racers that have been released recently. It's a decent racing game, but it's not as good as Need for Speed 3, Test Drive 5, or Ultim@te Race Pro" rating the game 6.8 (okay).