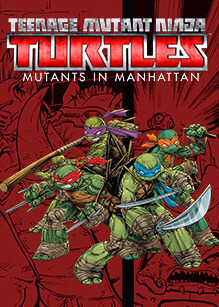 The game is an action hack and slash game with cel-shaded artstyle, in which players control the title characters, including Leonardo, Donatello, Michelangelo and Raphael, from a third-person perspective. With the exception of infinite shurikens, each turtle has an individual style of ninjutsu. Each turtle also has four ultimate abilities, which are interchangeable and shared from a well-sized list. For example, Leonardo can slow down time, and Michelangelo can perform cheerleading, which reinstate the cooldowns of other turtles' abilities. Players can shift between turtles at will in the single-player campaign. The turtles can perform successive attacks to create a combo. The four turtles also have the ability to parkour and use parachutes while traveling around the game's world. Players encounter numerous green orbs in the game. These orbs, known as Battle Points can be spent to upgrade the turtles' abilities - as well as buying items (such as grappling hooks and rocket launchers) from Master Splinter anytime during the game. April O' Neil provides assistance to players by giving hints and directions. The turtles can also scan their surroundings and tag enemies.

The game is divided into nine different stages. In each stage, players encounter random enemies before reaching a boss. When the player character is killed, other turtles (controlled by artificial intelligence in the campaign or by other players in the multiplayer) can help revive the players. If the turtles are not revived, they will be sent back to the subterranean lair. A mini-game will then begin, tasking the turtle to eat pizza as fast as possible. The game supports four-player online cooperative multiplayer.

The four Ninja Turtles arrive in the city of New York to find the Foot Clan showing up to cause trouble. Once the streets are cleared, the turtles are told by April via T-Glass that Bebop is robbing the city's bank. He's armed with chainsaw explosive bombs and guns. The turtles will need teamwork to get past him. In the second mission, Rocksteady, Bebop's partner, is destroying the subway system and has placed dynamite bombs with timers set to go off. The four brothers are prepared for the hammer-swinging Rocksteady; April communicates to them that Slash is hiding deep in the sewers. In the third mission, the turtles investigate while watching out for Slash who is throwing temper tantrums. Leo and company are directed to a construction site high up in the skyscrapers. Karai, the headstrong granddaughter of Shredder and Leonardo's secret crush, has the explosives put in place and the turtles have no time to waste. The bombs are defused but Karai is more than ready for Leo, Mikey, Donnie and Raph. She fights against the Turtles but they manage to defeat her, forcing her to retreat via a jet-pack, which impresses Mikey.

Armaggon is the fifth boss up to no good; he's waiting aimlessly for his next bite and has no patience when the turtles approach him. He's defeated and another problem occurs when they meet with Wingnut. The turtles can not stop his speedy movements until Wingnut makes a mistake in pausing during certain patterns. Wingnut is finished off and General Krang is not impressed with the turtles for making it this far. General Krang learns his lesson the hard way as the previous bosses have and the brothers celebrate too early resulting in General Kraang becoming Mega Krang. The Turtles have to use robots with lasers to fire at Mega Krang; lastly, Shredder is annoyed at the failures his subordinates suffered and takes on the fight with the turtles himself. Shredder proves to be more than a challenge for the turtles but through teamwork and everything else they have experienced, the Turtles defeat Shredder and save New York City from the Foot Clan taking over.

Ben Makedonski from Destructoid awarded it a score of 4.5 out of 10, stating "it doesn't even necessarily succeed where Platinum Games usually excels."

Dave Rudden from IGN rated it 4.9 out of 10, calling the game short, bland, and highly repetitive, while also expressing criticism at the lack of local co-op multiplayer.

Digital Foundry's John Linneman criticised the game for not reaching 60 frames per second on any platform, even though an Activision producer stated that local co-op multiplayer was omitted to reach it.

Game Informer awarded it a score of 6 out of 10, saying "Controlling the turtles is fun, but the structure of the levels, missions, and bosses leave much to be desired"

Hardcore Gamer awarded it a score of 2 out of 5, saying "About the only real way one can recommend Mutants in Manhattan is if you’re a really die-hard Ninja Turtles fan and have access to online multiplayer, and even then, the tedious level and mission design is sure to get grating after a while. In the end, sadly, not even an old-fashioned Ninja Rap could save this mess."

GameSpot awarded it a score of 4 out of 10, saying "Without a doubt, Mutants In Manhattan is a disappointment, one multiplied several times over not just by its pedigree, but by the fact that the ingredients for a good game are present."