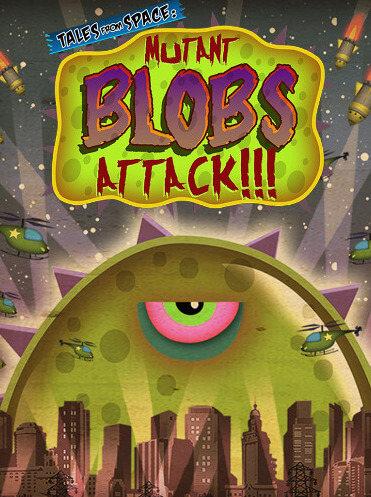 Tales from Space: Mutant Blobs Attack is a side-scrolling platform video game, released on February 21, 2012, as a launch title of the PlayStation Vita. It was developed and published by DrinkBox Studios. It is the sequel to Tales from Space: About a Blob. Mutant Blobs Attack was later released for Microsoft Windows computers with versions for PlayStation 3 and Xbox 360 released in June 2014.

The game is about a grumpy mutant Blob that escapes into the world and starts eating everything around him. Mutant Blobs Attack features new levels, new powers and controls, and a new Blob player character.

In Mutant Blobs Attack the player controls a gelatinous mutant Blob. The player can grow by eating loose objects in the game environment. Over the course of each level, the player encounters a series of obstacles they must grow large enough to bypass. The game combines traditional 2D thumbstick-based platforming controls with touch-based powers and abilities. Physics-based puzzles are often mixed in with the action.

Tales from Space: Mutant Blobs Attack was received positively by critics. IGN gave a score of 9 out of 10, saying "Tales from Space: Mutant Blobs Attack stole my heart." GameZone scored it 9.5 out of 10, saying "One of the PS Vita's first downloadable games turns out to be a must have for the system. As of 22 February, Metacritic showed that the game is the second best rated out of the 30 Vita games, with a score of 87%.