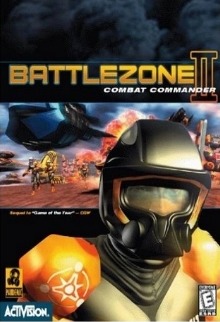 Battlezone II: Combat Commander is a 1999 video game developed by Pandemic Studios and published by Activision. It is the sequel to Battlezone 1998). Battlezone II is a hybrid tank shooter, first-person shooter (FPS) and real-time strategy (RTS) game. The player pilots various futuristic vehicles, while using the function keys to select and command units and structures. Battlezone II features two races, the ISDF (humans) and the Scions. A remastered version was released in March 2018 under the title Battlezone: Combat Commander on the gaming platforms GOG.com and Steam.

Battlezone II is set in the same alternative history universe as Battlezone. Its plot takes place in 1990s about 30 years after the original story of Battlezone and features an alien invasion theme. America's NSDF (National Space Defense Force) and the Soviet Union's CCA (Cosmos Colonist Army), the foes of the Cold War conflict, were forced to work together in order to combat their common enemy, the Furies. Access to alien technology has necessitated the creation of an international peacekeeping force, the International Space Defense Force (ISDF), whose role is to oversee distribution of the rare bio-metal resource and mediate disputes between member nations. To prevent the future misuse of bio-metal, the AAN (Alliance of Awakened Nations) is created to oversee the even distribution of the resource between the countries.

After several years, General Armand Braddock, former commander of the NSDF's elite Black Dog Squadron, secretly builds a base on Pluto from diverted resources without the knowledge of the AAN, and begins what he dubs 'Project Pedigree'. By fusing human test subjects (the former members of the Black Dogs) with biometal, Braddock is able to create a highly advanced force of powerful and intelligent combatants. However, tired of Braddock's deceit and enraged by what he has done to them, the subjects mount a rebellion and flee into space. Unable to pursue without arousing suspicion, Braddock is forced to monitor the edge of the Solar System, where they also discover a new celestial body, dubbed the "Dark Planet" because of its hidden nature, and even build a small facility there as well. Shortly after the loss of the Voyager-2 probe to a missile attack, contact with Cerberus Base on Pluto was lost.

A whole fleet of ISDF troops was dispatched to find out what happened, including Lieutenant John Cooke, whom Battlezone II's storyline revolves around.

Battlezone II has two alternate endings available to the player:

John obeys his superior's command and destroys the Scion craft. Braddock informs him that Manson and his men survived, but they refused to obey, saying that Braddock is a traitor to the AAN. Cooke inserts a small team under his lead and destroys the base. Manson's body is found at the outskirts of the base. They also find out that Burns has escaped.

Following Scion transmissions, they locate the heart of the Scion society, a medium-sized planet called the "Core" planet, which is presumed to be artificial. After establishing an outpost, Cooke follows a convoy to a hole in the crust, leading to the planet's interior. He descends, and after dispatching numerous automated defenses, destroys the central crystal, causing the planet to collapse and detonate.

Instead of shooting the Scion as commanded by Braddock, Cooke orders the Tug carrying Burns to follow the Scion. After leading him through an underground tunnel, the Scion confirms that she is Shabayev. She was found by the Scions on Bane after the crash. She explains that Braddock ordered the attack on the drop ships to silence them. He had also ordered the Voyager to be shot down to prevent the AAN from detecting the ISDF base on the Dark Planet. She also reveals to John that the Scions are actually humans who have been fused together with bio-metal. At the core of the Collective are the former members of the Black Dog Squadron. After the uprising, they fled to the Dark Planet, then into the Scion system, where they found the Cthonian ruins on Mire and embraced their culture. Their ultimate goal is not to destroy Earth, but to bring the enlightened Cthonian culture back to humanity.

John is transformed into a Scion to better aid their cause. He is informed by Burns that the three machines that were disarmed were called alchemators, and that they did not destroy planets but rather terraformers. The Core Planet is dying, as evidenced by a large number of dead Scions found on Pluto and Dark Planet before. The Scion can only survive if they find a new planet, and the Dark Planet is the ideal candidate.