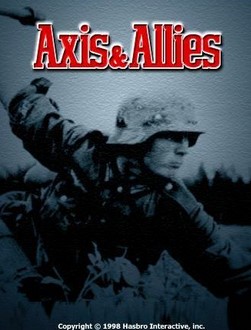 Axis & Allies is a 1998 computer wargame closely based on the Axis and Allies: Classic board game.

Players take control of one of five world powers at the start of 1942 in WW2, grouped into the opposing factions of the Allies (US, UK, and USSR) and the Axis (Germany and Japan). Victory conditions are set at the start of the game: complete world domination, the capture of enemy capitals, or reaching a set level of economic power by the Axis.

The game is turn-based, with the USSR turn first, and the USA turn last. Each power's turn of the game is broken into several phases. First is the research phase, where IPCs (a representation of industrial power) can be gambled in an attempt to develop advanced technology, such as jet engines or rockets. The remaining IPCs are then used to buy troops in the purchase phase. Troops are then moved in the combat move phase, and battles resolved in the combat phase. Non-combative moves are then performed in the non-combat move phase, new units are then placed at the powers' factories & IPCs for all territories the power now controls are collected in the place units/collect income phase and the powers' turn ends.

A second edition of the game was released in 1999 titled Axis & Allies: Iron Blitz. It added a function to allow the third edition rules of the game as well as new features such as allowing a submarine to submerge instead of withdrawal and having multiple AA guns occupy the same territory. In addition, it included many alternate scenarios, providing for events that ranged from a Western Allied-Soviet war after World War II (Allies: UK/US vs Axis: Soviet Union/(Communist) Germany), to the Molotov-Ribbentrop Pact being made into a formal alliance, which turns Japan into the Allies (Allies: UK/US/Japan vs Soviet-German Axis.) And, of course, there is the default scenario from the board game (Allies: UK/US/Soviet vs Germany/Japan.)

Each power has a turn of 5 steps during each round of play. Each of the 5 powers will have a turn in a complete round of play. A full round of play consists of: USSR, Germany, United Kingdom, Japan, and United States. If one power's armed forces are completely destroyed, that nation is removed from play and gameplay skips that power's turn. Example: United Kingdom destroys all of Germany's armed forces. The play now follows: USSR, United Kingdom, Japan and USA. However, if Germany's ally Japan liberates Germany's capital and later Germany can produce new units, then Germany's turn is now restored as it was at the start of the game.

IPCs otherwise known as Industrial Production Certificates, is the only currency in the game. IPCs are used to buy land units, sea units or air units. Each power collect IPCs at the end of their turn. IPCs are collected for every territory under the player's control that has an IPC value at the end of each turn.