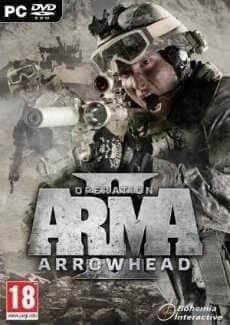 In ARMA 2: Operation Arrowhead, the player can assume the role of various military duties from simple infantry man or a special forces operative to tank commander or pilot of a combat helicopter. Also in some scenarios the users are allowed to command units like a real-time strategy game. Players are allowed to perform duties that real soldiers would perform during combat. In addition to campaigns, players are allowed to play mini-missions and participate in a simulated training program.

ARMA 2: Operation Arrowhead features United States Army military equipment, albeit with some creative liberties taken by the developers. The U.S. Army's standard M16 rifle has been replaced by the SCAR-L and SCAR-H in-game. New armored vehicles that were not included in ARMA 2 include the U.S. Army's Stryker ICV and Bradley IFV. The U.S. Marine Corps that featured prominently in ARMA 2 are not included in ARMA 2: Operation Arrowhead, instead being replaced with U.S. Army soldiers, wearing the Army Combat Uniform in the Universal Camouflage Pattern. In addition, three new factions are included: NATO, United Nations peacekeeping forces from the fictional country of Chernarus, and the Takistani Army. NATO forces include the United States Army, the Army of the Czech Republic, and the German Kommando Spezialkräfte.

One touted addition to the game includes the ability to have FLIR thermal imaging technology included on vehicles such as the AH-64D Apache Longbow, and featured as rifle optics. In the game, running vehicles and live humans will glow when viewed through FLIR imaging, as in real life.

ARMA 2: Operation Arrowhead is set in the fictional country of Takistan and takes place in the then-future of summer 2012; nearly three years after the Chernarus conflict of fall 2009 that is depicted in ARMA 2, right after ARMA 2's hidden ending. In the game's single-player campaign, Takistani government led by Colonel Muhammad Aziz threatens to use SCUD missiles against a neighboring Karzeghistan, following the outbreak of the economic crisis caused by the anti-government rebels who destroyed a significant part of country's oil wells. U.S. and NATO forces are sent in to prevent the attack and overthrow Aziz government and to possibly back up the anti-government royalist faction. Players have the ability to perform optional tasks throughout the game, allowing for multiple endings.