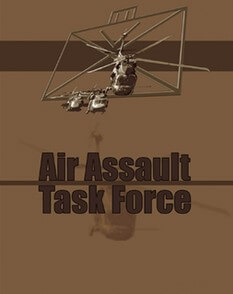 Air Assault Task Force or Armored Task Forсe is a computer wargame developed by ProSIM Company and published by Shrapnel Games. The lead developer was ProSIM Company founder, Pat Proctor. Other developers included Gary Bezant (The Falklands War: 1982) and Curt Pangracs (The Star and the Crescent).

Air Assault Task Force is a modern combat simulator and includes four campaigns, set at the Joint Readiness Training Center at Fort Polk, LA, at LZ X-Ray during the Vietnam War, in the ill-fated Ranger raid in Mogadishu, Somalia (the famous "Black Hawk Down" incident), and Operation Anaconda during Operation Enduring Freedom in Afghanistan. The game built on the pausable real time gameplay of ProSIM's BCT Commander and the friendly AI and hierarchy system of Armored Task Force. In addition to a major upgrade to these earlier game systems, it also includes a graphical and GUI overhaul that makes the game more visually appealing and playable than its predecessors.

In 2007, defense contractor Boeing commissioned ProSIM to create a custom version of the game for use as a ground combat simulator, to be paired with an intelligent tutor and after-action review agent application developed by Boeing.