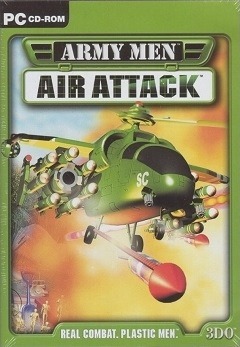 Army Men: Air Attack (Army Men: Air Combat for the Nintendo 64 and Game Boy Color versions) is a third-person shooter video game developed and published by The 3DO Company for PlayStation, Nintendo 64, Game Boy Color and Microsoft Windows. The game focuses on aerial combat and features the same protagonist, Cpt. William Blade. It is one of the first Army Men games to be powered by a 3D engine where terrain and units are rendered in real-time.

In Army Men: Air Attack, the evil Tan army is making a move into Green territory. Only one man has the ability to stop their advance: Captain William Blade. Take command of Blade and his ragtag crew of chopper pilots as they fly one of four choppers Huey, Chinook, Super Stallion, or Apache through 16 missions of plastic carnage. Help them maneuver through perilous settings like the "Backyard" and the "Picnic." When you get tired of seeing your buddies melted on the barbecue, call a friend to help you in the Cooperative Play mode. If sharing is not your thing, knock your friend's chopper out of the sky in a head-to-head match up. Either way, with Army Men: Air Attack, it is real combat with plastic men.

The Green and Tan armies are once again at war, this time by air. Players can select either the Huey, Chinook, Super Stallion or the Apache. In addition to the Tan Army are hordes of insects that players must also fight off. Players must protect tanks, trucks, other helicopters, a train, a teddy bear, and a UFO.

Pilot one of four helicopters through the treacherous terrain of the backyard, picnic areas, and nearby beaches. Engage in Air-to-Air and Air-to-Ground combat with enemies ranging from battleships to butterflies. Utilize the unique abilities of each airship to capture giant Teddy Bears, blow up sand castles, and save Sarge from being melted by kids with a magnifying glass. The main character is a Green Air Cavalry pilot named Captain William Blade. This game has over 12 missions with three extra choppers to unlock. The first helicopter is a Huey, then a Chinook, a Super Stallion, and finally an Apache. There are also three extra co-pilots to unlock. The first pilot is 'Woodstock', then 'Rawhide', next is 'Hardcore', and lastly Sargent Hawk. Captain William Blade, the leader of the newly formed Alpha Wolf Battalion, does battle against the mighty Tan empire in both the real world and plastic world.

An extra co-pilot, ‘Bombshell’ (addressed as Felicity in-game) can be unlocked after beating the game's campaign.