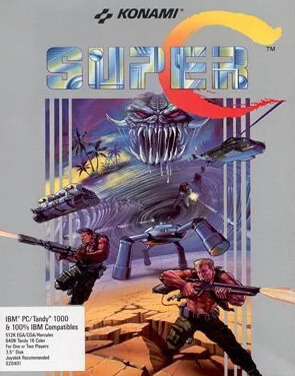 Super Contra, known as Super Contra: The Alien Strikes Back in Japan, is a run and gun video game by Konami originally released as a coin-operated arcade game in 1988.

It was ported to the Nintendo Entertainment System under the shortened title of Super C in North America and as Probotector II: Return of the Evil Forces in PAL region. It is the sequel to the original Contra and part of the Contra series. The game stars Bill Rizer and Lance Bean, as they are sent to thwart another alien invasion. Both the arcade version and the NES version have been re-released in various other platforms since their original releases.

A year after the battle with the Red Falcon Organization, Bill and Lance are sent on another mission. This time, the alien forces have taken over an allied military base, possessing most of its troops. Bill and Lance must not only fight against their former comrades-in-arms, but also a new mutated form of the same alien creatures they fought during their previous mission.

Like in the original Contra, the game can be played by up to two players simultaneously. The left player controls Bill (who wears green in this installment), while the right player controls Lance (who wears purple). The game retains the side-scrolling format from the previous game, discarding only the pseudo-3D and fixed screen segments. Instead, Super Contra features vertically-scrolling stages played from an overhead perspective, in which the player can move in eight directions. The controls remain mostly the same during the side-scrolling segments, with the only difference is that the player can now control the height of his jump by holding the joystick upwards or downwards while pressing the jump button.

The player can replace their default gun with one of four possible weapons by destroying the flying item capsules that appear throughout each stage. The available weapons include a machine gun, a spread gun, a bomb gun and a laser gun. This time, weapons can now be upgraded by picking up the same power-up twice in a row, resulting in greater destructive power. The power-ups in Super Contra are represented by the actual guns the player's character wields instead of the Falcon-shaped letter icons from the previous game. During overhead stages, the player can also pick up a "hyper shell" item that destroys all on-screen enemies, which is launched by pressing the jump button. The hyper shell can be launched at any time during these stages and the player can store more than one at a time.

The game consists of five stages, which are set in a military base, a jungle and the alien's lair. Stages 1, 3 and 4 are played from the standard side-scrolling perspective, while Stages 2 and 5 employ the top-down perspective. Throughout each stage, the player must fight his way through the enemy's line of defense (including a few mid-bosses) until reaching the final target awaiting at the end.

After running out of lives, the player is not allowed to continue up to five times before the game is entirely over; this depends on the DIP switch settings. Unlike the predecessor, each player can now continue at any time, with no need to wait until the other player runs out of lives.

Two versions of the Super Contra arcade game were produced: an English version (which was distributed not just in North America, but also in Europe, where the game retained its original title, in contrast to the Gryzor variant of the first arcade game) and a Japanese version. The two versions of the game are almost identical aside from the language of the text shown during the attract sequence. However, the English version ends the game after the player has cleared the final stage, whereas the Japanese version restarts the game from the first stage after the end credits are shown. On the second loop, the player's score, lives and weapons (including hyper shells) will be carried over from the previous playthrough and the game's difficulty will be set to its highest level (regardless of the machine's actual setting) - but the continuation feature will cease to be available; this means that the game will be completely over when the player completes the final stage again or loses all of his lives.

Super Contra received positive reviews. Allgame editor Aaron Kosydar described Super C as "an excellent game that a lot of hardcore gamers will never forget". Japanese game magazine Famitsu gave the Famicom (NES) version of the game a score of 25 out of 40.