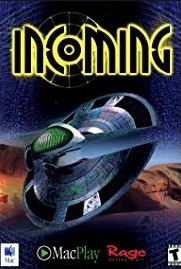 Incoming is a 3D shooter video game developed by Rage Software and published by Interplay. The game was first released for Microsoft Windows in late 1998, and was followed by a Sega Dreamcast version, which was released in Japan on December 17, 1998, in Europe on October 14, 1999, and in North America on November 30, 1999. Set in the near-future of 2009, the game primarily revolves around controlling vehicles and turrets to fight alien invaders of Earth in one of the Campaign modes, the Arcade mode, and with or against another player. Some levels include brief real-time strategy segments.

Praised for its then-advanced graphics and sound, the game was generally well-received on the PC, though the critical response was less positive for the Dreamcast version. A sequel entitled Incoming Forces was released in 2002 exclusively for the PC. An arcade version of the game, utilising a unique hardware interface, was released in 2003.

Primarily a vehicle simulation game, the player controls one of a number of possible vehicles in order to complete objectives. The vehicle used could be an aerial craft, defence emplacement, or surface craft, and is usually armed with a primary weapon (with infinite ammunition) and sometimes secondary weapons (with either a limited or infinite supply). Incoming was also noted for its arcade style; in particular, the logging of high scores and a "life" system.

There are three different game modes. The campaign mode follows the main storyline in which the player must complete a series of objectives to neutralise the alien threat. Typical goals include transporting cargo and defending allied convoys. Two variants of the campaign exist: "campaign action" purely consists of the simulation missions; "campaign tactics" features the same main missions as campaign action, but with some extra sub-missions. These sub-missions take place in the "tactical display", where the player controls several vehicles and gun emplacements in a similar manner to real-time strategy games.

Either campaign consists of ten missions (referred to as "phases" in the game) in each of the six locations. These locations can also be accessed in the arcade mode. This mode sees the player fight off alien craft while picking up as many "power-ups" (items which confer some advantage upon the player, such as temporary invulnerability and upgraded weaponry) as is possible. The same mechanics apply to the multiplayer mode, with some slight variations depending on the game type selected. Multiplayer is available in split-screen mode on both platforms in addition to networking and Internet options on the PC version.

Acknowledged by critics for having a simple storyline, Incoming is set in 2009 over a period of fifteen days. An increasing number of UFO sightings culminate in attacks on the international lunar base and other locations on Earth; and the construction of a base in the Arctic. Secret work is started on an "ADATA" (Anomaly Detection And Tracking Array) near Mount Kilimanjaro. The events of the game take place after an attack on the ADATA facility is initiated by alien forces.

The game is set in six locations: Kenya, defending the ADATA facility; the Arctic, attacking an alien base while defending a human one; the North Atlantic Ocean, where the player must defend oil rigs and attack a second alien base; California, where parts of a fleet to invade the alien's moon base must be defended; the Moon, attacking a further alien base; and a planet in the Crab Nebula, assaulting the planet from which the alien attackers came.

If the player has completed these in the Campaign Action mode, then in addition to these ten missions in each location, there are bonus "virus" scenarios, with one level in each location. Shortly before these missions, the aliens launched four virus bombs which impacted in the four location on Earth the player had previously visited. All buildings in these areas must be destroyed by the player to prevent the virus from spreading further.

Rage Software, developers of Incoming, were known for their cutting-edge graphics and effects. The game utilized the 3dfx technology, and was included in some retail versions of the Voodoo2 graphics card. An arcade version followed in 2003, running on the Vortek V3 Global VR arcade board, utilising the system's unique virtual reality hardware interface.