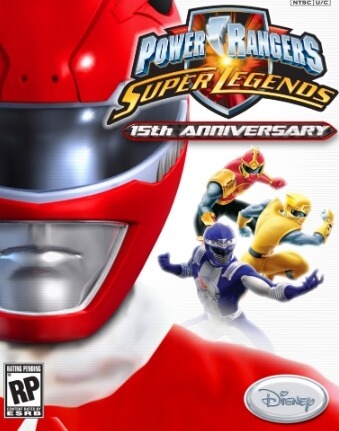 Power Rangers: Super Legends is an action-adventure video game based on the television franchise Power Rangers. It was released on October 23, 2007 for the Nintendo DS and on November 6, 2007 for the PlayStation 2 and for Microsoft Windows. The game was planned for release on Game Boy Advance and GameCube, but these releases were cancelled.

Long thought to have been purified by Zordon's energy wave at the end of Power Rangers in Space, Lord Zedd has reappeared in his old form. Concealed in a hidden dimension, he is interfering with the time stream, trying to alter the course of history to destroy every Power Ranger throughout time. Operating from the Hall of Legends, the new/Future Omega Ranger (confused with the original one and himself) must gather a force of Power Rangers and artifacts from across time to break through into Zedd's hidden dimension and restore the timeline.

Emperor Gruumm has set his sights upon the myth of the Hall of Legends, the resting place of the collected energies of Power Rangers across time. In his twisted mind, he envisioned a world where his enemy's power is not only stolen but used against them and to make him a living God over all creation. The Omega Ranger, aware of all timelines from within the Hall of Legends, discovers his plan and warns the Power Rangers to stand against it. For should the Hall of Legends fall into Gruumm's hands, all would be lost.

The game marks an anniversary gathering of selectable Power Rangers from fifteen seasons of the series, from Mighty Morphin Power Rangers to Power Rangers Operation Overdrive, from Rangers to Megazords (only the Dino Thunder and Mystic Force seasons are not represented). There are 16 playable characters on the Nintendo DS and 21 on the PlayStation 2 and PC. The dimensions in this game are somewhat similar to the 1994 SNES video game, Mighty Morphin' Power Rangers.

The game has been described as a blend of puzzle, action, and mission-based adventures ranging from one to two players.

Screencaps of the DS version revealed appearances by Zedd, and Gluto, as well as featuring locations such as Angel Grove and an "Ancient Ranger" temple.

A Nintendo Gamecube version of the game, which would be the same as the PS2/PC versions, was planned but abandoned.