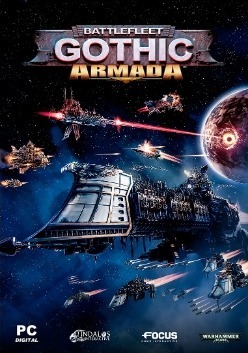 Battlefleet Gothic: Armada is a real-time strategy video game developed by Tindalos Interactive and published by Focus Home Interactive. It is set in the fictional universe of Warhammer 40,000, and is specifically an adaptation of the miniature wargame Battlefleet Gothic by Games Workshop.

Players will control fleets representing one of six factions (the Imperium's Imperial Fleet, Chaos Undivided, Orks Pirates, Eldar Corsairs, the Imperium's Space Marines and the Tau Empire) and battle for control of the Gothic sector of space. From the fastest frigates to the gigantic battleships, players will customize all aspects of their ships: weaponry, defense and support sub-systems, etc. each customization affecting the very performances of the ship and the special abilities available during battle.

Experience and promotions will also be awarded to ships as they survive bouts of war.

Set during the Gothic War, also known as the 12th Black Crusade in the Warhammer 40,000 lore, the game follows Admiral Spire of Battlefleet Gothic as he and the Imperium fight against the Forces of Chaos led by Warmaster Abaddon.

The prologue begins when Spire, then a Captain, investigates an abandoned space station only to learn it has been taken over by Chaos forces and a large Chaos fleet is heading to the Gothic Sector. Spire's ship escape and he informs his superiors, the head of the Imperial Navy of the Gothic Sector, Lord Admiral Cornelius von Ravensburg, and Inquisitor Horst of the Imperial Inquisition, of the upcoming invasion. After confirming that Spire is telling the truth, Horst promotes Spire to Admiral to lead Battlefleet Gothic to help the forces of the Imperium.

Battlefleet Gothic: Armada was announced by Focus Home Interactive on January 16, 2015. The game was developed using Epic Games' Unreal Engine 4. A Space Marines faction, separate from the Imperial Fleet, is available as downloadable content. A limited edition Early Adopters Box version was available to those that preordered the game, including the Space Marine faction from the start.

It has received positive reviews and has a score of 79% on Metacritic. IGN awarded it a score of 7.1 out of 10, saying "Battlefleet Gothic: Armada's promising space tactics are bogged down by excessive obscure details." PC Gamer awarded it 80%, saying "A tubthumping tribute to the 40K universe, with perfectly grim design. Multiplayer definitely needs work on its balance though."

A sequel, titled Battlefleet Gothic: Armada 2, was released on January 24, 2019.