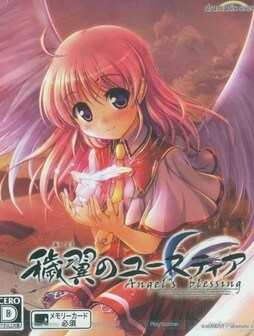 Aiyoku no Eustia (穢翼のユースティア Aiyoku no Yūsutia, lit. "Eustia of the Tarnished Wings") is a Japanese adult visual novel developed by August for Windows and was released on April 28, 2011. Aiyoku no Eustia is August's eighth game, preceded by Fortune Arterial and Yoake Mae yori Ruriiro na: Moonlight Cradle. It was planned to be released on March 25, but the schedule was changed due to the Great East Japan earthquake. An enhanced port for the PlayStation Vita titled Aiyoku no Eustia: Angel's Blessing was released on June 26, 2014. Two manga volumes based on Aiyoku no Eustia were published by Kadokawa Shoten. Novels, comic anthologies and drama CD's have also been released.

The title is a play on words: the actual Kanji used are ai (穢, dirty) and yoku (翼, wing), rendering the primary meaning of "Eustia of the Tarnished Wings". However, aiyoku is a homonym in Japanese, and also means "worldly passion" or "lust" (愛欲). Accordingly, the alternate reading is "Eustia of Passion", which is an allusion to events within the game.

After the surface of the world succumbed to chaos centuries ago, the city of "Novus Aither" (ノーヴァス アイテル Novus Aiteru) is kept afloat in the sky solely by the continual prayers offered by the Saint. Years ago, when the Saint's prayer was interrupted, an incident known as the "Gran Forte" occurred, causing a portion of the land to fall and split the lower city into two, separated by a cliff. Countless lives and property were lost or irreversibly affected in what would be known as the greatest disaster in the city's history.

In time, the lowest layer, known as the "Prison", became the home to people who lost much of their former lives during the "Gran Forte". Crime, famine, and disease run rampant, with "The Noncorroding Gold Chains", the ruling organization in the area specializing in the sex trade, keeping what little order that still exists. Meanwhile, a contagious disease which causes the infected to grow wings has spread throughout the city, and a unit commonly known as the "Wing Hunters" has been formed to deal with these people swiftly and often violently.

In this "Prison" resides Caim Astraea, a freelance ex-assassin who does odd jobs for his friend, the head of "The Noncorroding Gold Chains", for money. During one request, Caim finds Eustia, a winged girl who emits the pale purple light characteristic of the "Gran Forte" incident years ago. His encounter with Eustia will take him on a journey which will involve him with the most influential bodies of the city, including the Church and the royal government. As he searches for the meaning to his cruel, difficult life, he will discover the deepest and darkest secrets of Novus Aither.

Aiyoku no Eustia is August's eighth project, which was developed after other August games such as Yoake Mae yori Ruriiro na and Fortune Arterial. The scenario for Aiyoku no Eustia was written by Taku Sakakibara. The art and character designs were handled by Bekkankō. The movie production was managed by Yuki Kitagawa, and the music was managed by a music production company called Active Planets.

On December 24, 2010, the first trial edition, Aiyoku no Eustia - Tech Gian Super Prelude, was made available on platform Windows, with an age rating of 15+. Two other trials were released in Japan also, one on December 28, 2010, and the other on January 14, 2011, the age rating changed to 17+. On April 28, 2011, the first press edition was released, followed by a regular edition for Aiyoku no Eustia, which was made available on Windows in the same year, July 29. Both shared an age rating of 18+. Aiyoku no Eustia: Angel's Blessing will be released for PlayStation Vita on June 26, 2014.