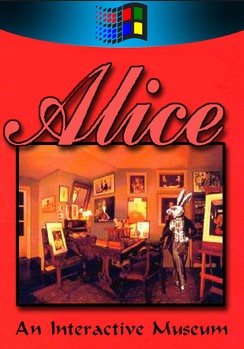 Alice: Interactive Museum is a 1991 visual novel/click-and-go adventure game, developed by Toshiba-EMI Ltd and directed by Haruhiko Shono. It uses elements and ideas inspired by Lewis Carroll's Alice's Adventures in Wonderland, and uses pre-rendered 3D computer graphics (like 1993's Myst). It was designed for Windows 3.x and later released for the Windows 95 platform. In 1991, Shono won the Minister of International Trade and Industry's AVA Multimedia Grand Prix Award (AVAマルチメディアグランプリ 通産大臣賞を受賞) for the game, and in 1995, Newsweek coined the term "cybergame" to describe games such as Alice and Shono's second game, L-Zone. They were followed by Shono's third title, Gadget: Invention, Travel, & Adventure, in 1993.

The player wanders through a mansion of twelve rooms including a gallery, an atelier, a wine cellar and a photo studio. Each room is interconnected via halls, doors, and secret passages - one of which leads to the outside world. As the player wanders, he searches for a deck of playing cards, upon which are clues which will lead to The Last Room and the end game. The artwork on the walls is very interactive resulting in clues or surprises.

Alice was developed with MacroMind Director. With music by Kazuhiko Kato, and artwork by Kuniyoshi Kaneko, the game has been noted as an ambitiously artistic piece of software.

Computer Gaming World in 1993 called Alice "like some kind of charmingly weird and elusive scavenger hunt where one is never really quite sure where they may be going or what they are looking for". The magazine praised the art as "a very elegant and richly rendered environment that makes it a browser's paradise", comparing it to the Rene Magritte's surrealism. It recommended Alice to those interested in a "surreal 'electronic toy'", not a CD-ROM game.

Shono was heralded as a pioneer by America's Newsweek and Japan's Ministry of International Trade and Industry. Following the sleeper success of Shono's third title Gadget: Invention, Travel, & Adventure (1993), Alice and L-Zone were re-released in America.