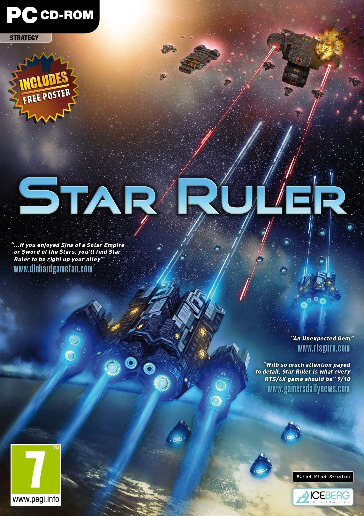 Star Ruler was first announced on July 5, 2009 in the Irrlicht Community Forums, the game engine on which Star Ruler was based. It was released on August 21, 2010. The game was launched in retail outlets in the EU on August 16, 2011 via Iceberg Interactive and was planned to launch Mid-October in the US via Interactive Gaming Software (IGS). However this deal fell through and Star Ruler never launched in retail outlets in the United States.

Star Ruler features a 1 to 10,000+ star system count galaxy of configurable shape. The size of the in-game universe is only limited by the processing power of the user's computer. Generated systems may have orbiting planets, moons, asteroids, comets, or aggressive, capturable, NPC assets. Gameplay occurs in a single space in real-time with the rate of time determined by the player. Star Ruler also features Newtonian mechanics in its ship movement.

Key differences from other games of the genre are: Detailed unit creation, behavior, and automation customization, physically modeled star systems and orbiting bodies, and a lack of traditional maintenance and unit count cap game mechanics.

One of Star Ruler's most impressive components is the ship construction. Each ship is built around a hull type. Different hulls will fulfil different purposes. For example, a Heavy hull is more resilient, but offers less space for components. A station hull is very resilient, and offers the most component space, but cannot mount engines. Each component can be scaled, and its effects scaled with it. For example, a 2.0 railgun will do half as much damage as a 4.0 railgun, which is the largest size, but will also consume half the power. Things like a bridge, life support, crew quarters, and power generators are necessary for most ships. The most unusual feature of Star Ruler's ship building system is the ability to scale ships. It is possible to build everything from a near microscopic scout ship to colossal dreadnoughts that are larger than a star.

A sequel (Star Ruler 2) was announced on August 1, 2013 with a prospective launch date of late 2014. The sequel features systems novel to the 4X genre including its communal Diplomacy and energy systems while also featuring new spins on economic management, ship design, and research progression.

Star Ruler 2 was available on Steam, as part of Steam's 'Early Access' program.

On July 22, 2018, Star Ruler 2 was released on GitHub as an open-source project, including assets (beside music) under a CC BY-NC Creative Commons license as Blind Mind Studios has ended activity.