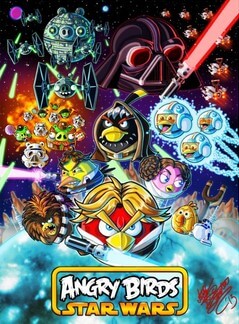 Angry Birds Star Wars is a puzzle video game, a crossover between the Star Wars franchise and the Angry Birds series of video games, launched on November 8, 2012, first for Windows, iOS and Android devices, later also to Mac and BlackBerry. The game is the sixth Angry Birds game in the series. The characters are copyrighted from George Lucas's double-trilogy. On July 18, 2013, Rovio announced that Angry Birds Star Wars will be heading for the PlayStation 3, PlayStation Vita, Xbox 360, Wii, Wii U and the Nintendo 3DS on October 29, 2013 in conjunction with Activision. As of August 2013, the game has been downloaded over 100 million times on its various platforms. The game is a launch title for the PlayStation 4 and Xbox One.

The game combines elements of both Angry Birds and Angry Birds Space, featuring levels that take place on both standard terrain and in outer space. The game begins on Tatooine, Anakin Skywalker and Luke Skywalker's home desert planet, moves to the Death Star, travels to Hoth, then Cloud City, and eventually ends up with Endor and Death Star 2. With the exclusion of Blue Bird, all the Birds are given new powers not yet seen before in a canon Angry Birds title, some of these that are upgraded as the game progresses further. Players can replay previously completed levels with the upgraded abilities.

Differences from other games are that Birds may still perform their chosen abilities a split second after colliding with an object. The Millennium Falcon is used instead of the "Mighty Eagle" found in previous games. When a certain number of stars are earned, the player gets a reward. It can be either 5 Millennium Falcons (an item that may be used during normal levels to try to earn badges) or access to a Golden Droid level. There are additional bonus levels if the player manages to hit golden droids in selected levels. On June 13, 2013, power-ups were added.

There was a Facebook version of Angry Birds Star Wars that included weekly tournaments in addition to some story levels. It closed down on March 3, 2014.

The game has received favorable reviews with a Metacritic score of 88/100 based on 22 reviews. Mark Brown of Pocket Gamer gave the title a Gold Award, praising the game for being "faithful to the source material" and "filled with content". Justin Davis of IGN says it is a great game with Star Wars references and Force powers, and has a huge variety of perfectly tuned stages.

In a 2013 poll on the Rovio website, the game collected the most votes for favorite Angry Birds game. The Facebook version has garnered a lot of positive response as well.

At the 2013 Webby Awards, the game was awarded as the "Best Game" from both the Judges and as the People's Choice.