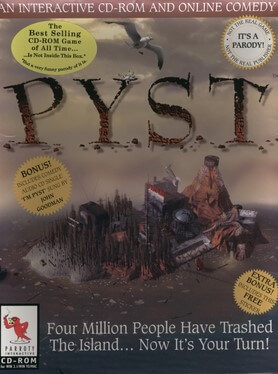 Pyst (stylised as PYST) is an adventure computer game released in October 1996. It was created as a parody of the highly successful adventure game Myst. Pyst was written by Peter Bergman, a co-founder of the Firesign Theatre, and was published by Parroty Interactive, with Bergman, Stallone, Inc. as co-publisher. Mindscape began distributing the game on August 20, 1997. The parody features full motion video of actor John Goodman as "King Mattruss", the ruler of "Pyst Island". Versions of the game were produced for both the Windows PC and Apple Macintosh operating systems.

Parroty Interactive was a division of Palladium Interactive, whose other brands included Ultimate Family Tree and Palladium Kids. Parroty intended to create National Lampoon-esque "humorous CD-ROMs, web sites and other forms of interactive comedy". This title served as Parroty's debut game in the interactive parody space, which would be followed by games such Star Wars parody Star Warped. The company is now defunct, and the game is not currently in release.

The basic concept of Pyst was to show what Myst Island (from the best-selling game) would look like after four million people (that game's players) had visited and "explored". Pyst developer and comedian Peter Bergman wanted to give Myst players the ability to "'experience the island in a whole new light". Palladium President Ed Bernstein wanted the game to be a "transformative work that moved way beyond Myst", in order to avoid copyright issues with Myst publisher Broderbund, on the grounds of the new game being a parody work. A spokesman from Broderbund said the company was unfazed by the project, commenting "We've seen imitators and they usually just give us a good chuckle". Bergman discovered that the sense of comic timing he had for his live shows couldn't be replicated in the digital realm, and he had to adapt accordingly. Firesign Theatre website Firezine said that the game was illustrative of Bergman's ability to "survey America's culture and obsessions like a maniacal monitor reflecting the absurdness of it all, while casting his iconoclastic eye to read the entrails of the present coarse and our delirious future".

Bergman collaborated with David Ossman, Phil Proctor, Melinda Peterson, and other players from his Radio Free Oz show to produce the game. In addition, he hired Mike Sansonia to create the game's music, while mouth-sound-effects artist Fred Newman recorded voice tracks. John Goodman plays "King Mattruss", the ruler of "Pyst Island". The 2004 book Game Work: Language, Power, and Computer Game Culture noted that this was an example of the then-recent trend of famous actors starring in digital movies within games. Goodman and Bergman had worked together in radio, while Goodman also had appeared on the Proctor and Bergman Comedy Service series prior to Pyst. The game also includes an original song, "I'm Pyst", performed by Goodman and written by Bergman.