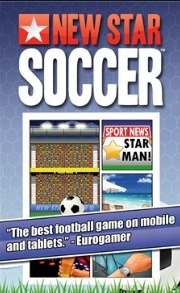 New Star Soccer, also known as NSS, is a series of football video games published by New Star Games, which lets the player create and control a new football player as he moves through the ranks of the leagues and national teams. The game may be best known for its mobile version, which won a BAFTA in 2013 for Best Sports/Fitness Game.

Its creator, Simon Read, was inspired by Sports Interactive's Championship Manager, and Gremlin Interactive's Footballer of the Year.

In the first two versions of the game, NSS 1 (2003) and NSS 2 (2004), the action on the field was a running text commentary of key elements of the match, where certain situations required intervention to make a decision on how the player acts, like whether to pass, tackle or shoot.

Since the third version of the game, NSS3, released in 2005, the gamer controls his player with the keyboard, joystick or gamepad. Matches are played out in 2D graphics giving full control of a particular player's actions.

A fourth version of the game, NSS4 (Later re-released as NSS 2010), was released on November 7, 2008. Three public betas featuring the match engine only were released and 6 private career betas were released. The new game heralded major changes because it consisted of a single application controlling career and match gameplay, rather than two separate applications, as in New Star Soccer 3. It featured an entirely new game engine with improved gameplay, including 360° control, more realistic dribbling and 3D graphics.

NSS 4 was the first in the series to feature a Macintosh version of the game, and Linux support has also been discussed. Beta versions are also being made available to the general public in the official forum. The fourth installment also included a database of over 30,000 players, 3000 teams and stadiums.

The fifth version of New Star Soccer, NSS5, was released in August 2011. NSS5 returns to 2D gameplay, but with a completely new match engine. The game is a major departure to all around the world from previous releases in that it is free-to-play and is integrated with an online account system. Free users are allowed to play up to 3 in-game matches a day, whereas in previous installation of the game a demo version with a 10-match limit was offered. Users wishing to play more often must purchase a premium account. Another change is the abandonment of the vast player database that shipped with previous versions. NSG cited the inconvenience of the massive effort required to create, maintain and implement such a database in affecting their decision to drop it. However, the game still allows one to play in the leagues of over 100 countries.

In December 2005, GameTunnel named NSS3 "Sports Game of the Year" and placed the game as the 10th best independently produced game of 2005.

In December 2008, GameTunnel named NSS4 "Sports Game of the Year"  and placed it 6th best independently produced game of 2008.