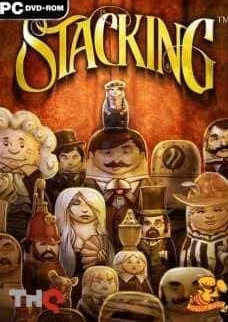 The game is based on the Russian stacking matryoshka dolls, an idea coined by Double Fine's art director, Lee Petty, who saw the dolls as a means to replace the standard player interface used in graphical adventure games. The player controls the smallest doll, Charlie Blackmore, who has the ability to stack and unstack into larger dolls and use their abilities to solve puzzles to allow Charlie to free his older siblings and put an end to child labor enforced by the antagonist, the Baron. Puzzles within the game have multiple solutions, and include additional puzzles and challenges that allow the player to explore the game's world outside of the main story.

Stacking was well received by critics and praised for its alluring appearance, humorous story, and accessible gameplay for casual players.

Set in a fictional version of the industrial age, the story begins with William Blackmore, a professional chimney sweep, leaving his family to take a job under a powerful industrialist, the Baron. A few months later, with William having failed to return and the family deep in debt, the four Blackmore children (Albert, Agatha, Abigail, and Archibald) are forced into apprenticeships by the Baron's agents, leaving the youngest, Charlie, alone with his mother Agnes. A few weeks later, a pigeon arrives with a letter from Albert, who reveals that the Baron has split up him and his siblings, forcing them to work as slaves. Charlie subsequently sets out to rescue them, recruiting a friendly hobo named Levi to help him set up a hideout in an abandoned section of the Royal Train Station, where a strike has forced the station's management to use Albert and other children as coal shovelers.

Charlie sets up a meeting between the strike leader and representatives from the Train Guild, breaking the strike and freeing Albert. Another letter, this time from Agatha, then leads him to the Baron's private cruise ship, the Commodore Perry, which is currently embarked on a never-ending voyage. By turning a small group of wealthy and influential passengers aboard the Perry against the ship's captain, Charlie forces him to return to shore, allowing Agatha to return home. A third letter leads Charlie to slip aboard a massive zeppelin hosting an international summit on whether or not to ban the use of child labor, which the Baron has rigged by abducting the ambassadors opposed to him. Charlie frees them and they manage to pass a formal ban, but the Baron subsequently orders his men to overload the zeppelin, intending to kill the delegates in a staged "accident". With the help of Abigail, who he rescued earlier, Charlie and the ambassadors fix the damage and save the zeppelin before it crashes.

In an attempt to win back the public's trust, the Baron announces plans to send all of his former child laborers on an all-expenses paid vacation using his newly-constructed private train. However, the whole thing turns out to be a trap; the Baron and his stockholders intend to transport the children to an offshore factory, outside of international jurisdiction. Furthermore, the entire Blackmore family has been taken hostage, watched over by the Baron's henchmen, the Generals. Charlie manages to subdue them individually and free his family, including his father. Unfortunately, they are unable to stop the train before it reaches its destination, and the Baron reveals his true plan: to turn the factory into an artificial island and sell the children as a cheap labor force.

Together with his family and friends, Charlie strips away the Baron's layers until they are both the same size. The Baron summons guards to assist him, but Levi and his hobo cousins show up in a makeshift helicopter and defeat them. Charlie and the Baron then confront each other in a final duel of rock-paper-scissors, ending with the Baron being thrown into a pit filled with captive orphans who tear him into pieces, leaving behind only his monocle and top hat. Upon returning home, William takes a better-paying job, finally freeing the Blackmore family from poverty.

The player controls the smallest doll, Charlie Blackmore, who is attempting to reunite his family that is being forced to work for an evil industrialist named The Baron. Charlie is able to jump inside dolls that are one size larger than he and control them, as long as the larger doll is facing away from him. If the player already controls a stack of dolls, that stack can jump into a one-size-larger doll as well. The player can also unstack the dolls at any time in order to enter dolls smaller than his current stack. Certain unique dolls, outside of Charlie, have their own special abilities—such as the ability to unlock doors, float to higher locations, or lure other dolls around, which can be used by the outermost doll. Thus, the player must stack and unstack the set of dolls possessed by Charlie to solve puzzles throughout the game. Later puzzles may require the use of multiple dolls to combine their skills.

The various challenges for each mission contain multiple solutions, with rewards offered for finding all of them. For example; in a challenge where the player must clear out a lounge of rich people, players can either sneak in a poorly dressed man into the party, or have another character flatulate into an air vent to clear everyone out. There are also rewards for completing side missions, discovering unique dolls, finding and stacking a matching set of dolls and performing "Hi-jinks" with certain dolls. Along with achievements and trophies, rewards can be viewed via dioramas constructed by Charlie's hobo friend, Levi.