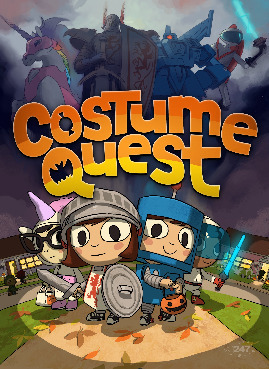 Costume Quest is a party-based role-playing video game developed by Double Fine Productions and published by THQ. In the game, the player controls a kid that is trick-or-treating with their twin on Halloween night when they encounter a monster that kidnaps the sibling. The player must travel around the local neighborhood collecting items for their costume, candy and fellow children as companions in order to face the monster and rescue the sibling. The costume aspects are used in battle segments, where the player character and companions are transformed into the monsters and creatures they are dressed as to fight other monsters. The sequel, Costume Quest 2, was released in 2014.

Costume Quest incorporates elements of exploration of adventure games and character growth of role-playing video games. In the exploration part of the game, the player character explores their neighborhood, seeking out quests through trick-or-treating that reward the character with hints to the sibling's location, more candy (a type of currency for interactions with other children), and costume parts that can be used to alter the character's costume. The character can also befriend up to 4 non-player characters that can help with some aspects of quest solving.

At times, the player characters will encounter monsters, leading to the battle mode for the game. Here the children become giant versions of what costumes they are wearing, along with abilities reflected by that costume; for example, a child wearing a makeshift robot costume becomes a giant mechanized robot, while a child wearing a medieval sweater becomes a knight in armor and sword. Battles are turn-based, allowing the player to select attacks, blocks, or a special move that requires hitting a quick time event at the right moment to achieve maximum damage to their foes. Winning battles leads to additional rewards towards the player's main quest.

The game takes place on Halloween. Fraternal twin siblings Reynold and Wren are new in their neighborhood and are asked by their mom to use their trick-or-treating to make new friends in the neighborhood. The player at this point chooses which sibling to play as. The two dress in their costumes, with the non-playable character dressing as a piece of candy corn and the playable character dressing as a robot. A monster with a sweet tooth sees the non-playable sibling, and kidnaps him or her. The player character must now save their sibling in time and be home before curfew.

Costume Quest is a result of a series of "Amnesia Fortnights" that Double Fine had used during the period of Brütal Legend's development when they were unsure of their publisher. During the Amnesia Fortnights, the team split into four smaller groups and worked on prototypes for potential future games, later presenting these to the rest of the Double Fine team for review. All four prototypes were well received internally, and the ideas were set aside once they began work on Brütal Legend again. Following completion of that game, Double Fine believed that Electronic Arts had authorized them to continue work on a Brütal Legend sequel, but discovered later that the sequel had been put on hold indefinitely, leaving the studio with no projects. Instead, Tim Schafer turned back to the Amnesia Fortnight products and sought to develop those as smaller games among several publishers. Two of them, Costume Quest and Stacking, were picked by THQ for publication as downloadable titles.

Costume Quest's development was led by Tasha Harris, Double Fine's lead animator and a former Pixar artist, with Tim Schafer providing support where needed, particularly in writing. The concept of the game was an idea that Harris had had prior to joining Double Fine, but never had a chance to expand on while at Pixar. She wanted the game to capture "that nostalgic feeling of these kids playing dress-up", and used old photographs of children in Halloween costumes to flesh out the game. Harris had mentioned the idea to Schafer, and Schafer chose her project as one of the four to be developed during the Amnesia Fortnights. Though Harris' original concept was not based on a role-playing game, she considers the game to have been influenced by older Nintendo games such as Dragon Quest and Final Fantasy, and games that take place in a modern setting like EarthBound and Pokémon. She also took cues from The Legend of Zelda series, where exploration would be paced through the acquisition of new items within the game. Harris stated that she wanted to "make a game that was like the RPGs that she loved growing up, but make it modernized so it looks cool and people enjoy playing it now" to take advantage of the growing popularity of titles available as downloadable content.