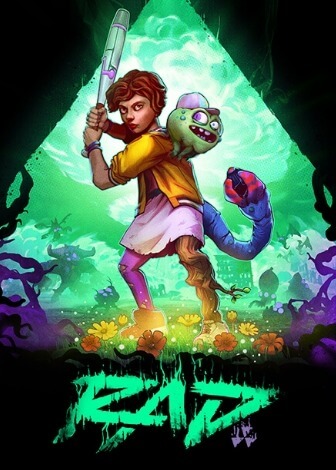 Rad is a roguelike video game developed by Double Fine and published by Bandai Namco Entertainment. It was released for Microsoft Windows, Nintendo Switch, PlayStation 4 and Xbox One on August 20, 2019.

Rad is a roguelike video game played from an isometric perspective. In the game, players control a teenager whose goal is to explore a procedurally-generated wasteland for effigies known as respirators, items that may restore the human civilizations after a devastating apocalypse. As the character explores the wasteland, their genes will mutate, granting players additional powers and perks. For each character, players can have unlimited passive bonuses and at most three active mutations. If the player character dies, they will be replaced by a new character.

Lee Petty, the director for Headlander, served as the game's director. The game was inspired by his teenagehood and his love for 1980s aesthetics. In each run, abilities are gained randomly. According to Petty, this creates different combinations, which enables players to better explore the strengths and weaknesses of each mutation.

The game was officially announced in March 2019 by Bandai Namco Entertainment. The game was released for Microsoft Windows, PlayStation 4, Nintendo Switch and Xbox One on August 20, 2019.