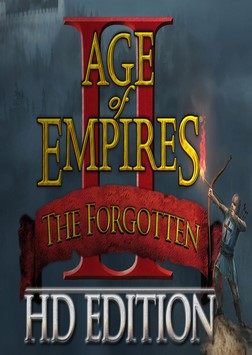 Age of Empires II: The Forgotten is the second expansion pack to the 1999 real-time strategy game Age of Empires II: The Age of Kings, having been released nearly 13 years after the first expansion, The Conquerors. Created for the HD Edition of the game available on Steam, The Forgotten originated as an unofficial modification for the game known as Forgotten Empires. The expansion pack was developed by the team that created the mod with the assistance of SkyBox Labs, based in Vancouver. The Forgotten introduces five civilizations (the Italians, Indians, Slavs, Magyars, and Incas), seven campaigns, units, technologies, gameplay modes, maps, improved AI and other tweaks to gameplay.

The Forgotten introduces various new gameplay features, tweaks and previously undetected bug fixes, including the new game modes Capture the Relic and Treaty. Additional maps, including an expanded maximum map size that is four times bigger than the previous largest. Over 30 new technologies and 9 new units are included. Custom creations can be shared directly to the Steam Workshop. Artificial Intelligence has been improved, modeled on competitive players.

Battles of the Forgotten

Bukhara (557) Khosrow I leads the Sassanid Persians into battle against the White Huns while they are at peace with the Byzantines, allying with the Gökturks to do so, all the while taking advantage of the Silk Road trade to achieve a solid economic base. Once the White Huns are defeated, Khosrow must then defeat the Gökturks, who have turned against him.

In April 2015, Microsoft announced that a patch, as well as a new downloadable content (DLC), which is a follow-up to The Forgotten is in development through a blog post. The DLC includes features such as civilizations, campaigns, game modes and units. This expansion was released with the name The African Kingdoms.

(0) Comments on "Age of Empires II: The Forgotten Full Version"