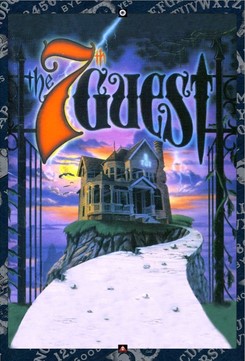 
The 7th Guest, produced by Trilobyte and originally released by Virgin Interactive Entertainment in 1993, is an interactive movie puzzle adventure game. It was one of the first computer video games to be released only on CD-ROM. The 7th Guest is a horror story told from the unfolding perspective of the player, as an amnesiac. The game received a great amount of press attention for making live action video clips a core part of its gameplay, for its unprecedented amount of pre-rendered 3D graphics, and for its adult content. In addition, the game was very successful, with over two million copies sold, and is widely regarded as a killer app that accelerated the sales of CD-ROM drives. The 7th Guest has subsequently been re-released on Apple's app store for various systems such as the Mac. Bill Gates called The 7th Guest "the new standard in interactive entertainment".

The game has since been ported in various formats to different systems, with Trilobyte mentioning the potential for a third entry in the series.

The game is played by wandering through a mansion, solving logic puzzles and watching videos that further the story. The main antagonist, Henry Stauf, is an ever-present menace, taunting the player with clues, mocking the player as they fail his puzzles ("We'll all be dead by the time you solve this!"), and expressing displeasure when the player succeeds ("Don't think you'll be so lucky next time!").

A plot of manipulation and sin is gradually played out, in flashback, by actors through film clips as the player progresses between rooms by solving twenty-one puzzles of shifting nature and increasing difficulty. The first puzzles most players encounter are either one where players must select the right interconnected letters inside the lens of a telescope to form a coherent sentence; or a relatively simple cake puzzle, where the player has to divide the cake evenly into six pieces, each containing the same number of decorations. Other puzzles include mazes, chess problems, logical deductions, Simon-style pattern-matching, word manipulations, and even an extremely difficult game of Infection similar to Reversi that utilizes an AI (and would later go on to make an encore appearance in the sequel). For players who need help or simply cannot solve a particular puzzle, there is a hint book in the library of the house. The first two times the book is consulted about a puzzle, the book gives clues about how to solve the puzzle; for the third time, the book simply completes the puzzle for the player so that the player can proceed through the game. After each puzzle, the player is shown a video clip of part of the plot, if the hint book was consulted 3 times, the player does not get to view the clip. The hint book can be used for all but the final puzzle.

The 7th Guest was one of the first games for the PC platform to be available only on CD-ROM, since it was too large to be distributed on floppy disks. Computer Gaming World reported with amazement in 1993, "not only does Guest consume an entire CD-ROM ... it actually requires TWO." Removing some of the large movies and videos wasn't an option as they were essential to the gameplay. This game, along with LucasArts' Star Wars: Rebel Assault and Brøderbund's Myst, helped promote the adoption of CD drives, which were not yet common. The game's POV footage of walking through the house was originally planned as live-action video in a practical set, but the idea was abandoned after pre-rendered 3D sequences proved feasible and more cost-effective.

The game begins with a flashback to 1935 in the town of Harley-on-the-Hudson. A drifter named Henry Stauf kills a woman to steal her purse, beginning a series of deplorable acts. He has a vision of a beautiful doll, and the next day begins carving it. He trades the doll for food, drink and a place to stay at a local tavern. Stauf has other visions of dolls and toys, and crafts and sells these as well. Stauf becomes a successful toymaker. He uses his fortune to build a mansion at the edge of town, following another vision. At the same time, several children possessing Stauf's toys contract a mysterious illness and die. Stauf disappears into his mansion and is never seen again.

In the game's present, the narrator (the player's character) named "Ego" awakens in the Stauf mansion. The mansion is deserted, but as Ego explores it, he has ghostly visions of events in the past. These visions all take place on a night sometime after the deaths of the children, where six guests were invited to the Stauf mansion: Martine Burden, a former singer; Edward and Elinor Knox, a dissatisfied middle-aged couple; Julia Heine, a bank worker who reminisces of her youth; Brian Dutton, a fellow shop owner; and Hamilton Temple, a stage magician. The six arrive but find no sign of Stauf or anyone else. They discover a number of puzzles that give them instructions. They learn that Stauf wanted them to bring him a seventh, uninvited guest: a boy named Tad who entered the house on a dare. The guests debate what to do. Elinor and Hamilton feel they must find Tad and help him escape Stauf's plan. The others search for Tad in earnest to claim their reward from Stauf. The evening becomes bloody as the guests turn on one another or become trapped by Stauf's machinations. Julia, the last survivor, drags Tad to the attic where Stauf waited for them. Having made a pact with the evil force that gave him his visions and killed the children, Stauf has transformed into a horrific creature. He needs Tad's soul to complete the pact. Stauf kills Julia and entangles Tad with a prehensile tongue.

Ego realizes that he is the spirit of Tad, witnessing the events of that night over and over but previously unable to help; the house has been a purgatory for him. Ego finds he can now intervene in the events, and helps Tad to escape. Stauf is unable to recapture the child, and the evil entity consumes Stauf for failing to complete the pact. Tad thanks Ego for his help, and then Ego steps into a sphere of light and disappears.