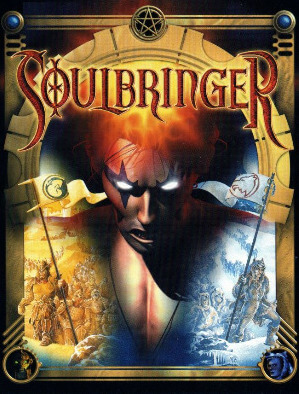 Soulbringer is a fantasy RPG developed by Infogrames and Gremlin Entertainment. Published and released by Interplay on June 30, 2000 the game received lackluster reviews and was not a great seller for Interplay. It was later packed and shipped in combination with Interplay's Planescape: Torment.

It starts off with the story of a young man arriving in a town called Madrigal to find his uncle Andrus, who is the man's only remaining family member after his father died. However, the protagonist is soon caught in the middle of strange bandit activity around town and then drawn into escalating political and supernatural strife across the world. During the game, it is revealed that the hero is a reincarnation of a powerful being whose purpose is to defeat a group of ancient demons known as Revenants. Even though forgotten, the Revenants are secretly standing behind all major conflicts and problems encountered. The hero has to reawaken his past-life powers, travel to parallel worlds and ultimately trap the Revenants within the mystical Well of Souls.

The game includes both a good and an evil ending.

The game is 3D with a helicopter POV

For the combat system, each weapon has a set of possible moves, with more powerful moves becoming available as points are put into the "combat" skill.

Spells are obtained from spellbooks that are unlocked by runes; more powerful spells become accessible as points are put into the "magic" skill. A spell's power depends on magic skill and on strength within the elements that make up the spell.

Each move and spell requires a certain amount of time to prepare and execute (including drawing the weapon, if necessary) Motion capture was used to display such actions for added realism. Soulbringer also takes terrain and placement into account (e.g. spiders on the ground can only be hit by "low" attacks while an enemy soldier higher up on a hill can only be hit by "high" attacks)

Combinations of attacks and spells can be preset and assigned to a hot key.