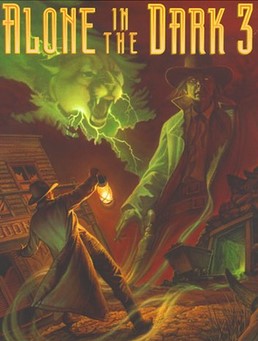 Download Alone in the Dark 3 Free for PC Torrent

It's 1925 and after Edward Carnby's success in his previous two investigations, a journalist has nicknamed him the 'Supernatural Private Eye'. This time, he is called to investigate the disappearance of a film crew at a two-bit ghost town known by the name of Slaughter Gulch located in the Mojave Desert in California. Among the disappeared crew is Emily Hartwood, Jeremy Hartwood's niece from the original. Edward soon discovers that a curse has gripped the town, and an evil cowboy from the Badlands named Jed Stone is the villain who is responsible for the crew's disappearance. Lurking around town are many trigger-happy sharpshooters, deranged prospectors, and bloodthirsty lost souls whom Edward must ward off with both his strength and his wit.

The main theme of this game is the Wild West, as Carnby is pitted against a town filled with "zombie cowboy outlaws" who attack him with revolvers and lever-action rifles. More traditionally mindless, shambling zombies begin to appear about midway through the game. Towards the end of the game, the concept of radioactive mutation plays a significant role in the story, and the player ends up fighting monstrous creatures created from the radiation.

This was the first game in the series not to be released on floppy disks. Rather, it was released as a CD-ROM game since the initial release, with full Red Book audio soundtrack and dialogue speech (in English, French, German, Spanish, Italian and Japanese, depending on the country the game was released) like the CD-ROM re-releases of the previous two games. It was also the first game in the series to be exclusively released for several computer formats and therefore it didn't receive any official console release unlike the previous two games.

Outside of Europe, the game was distributed in North America by Interplay Entertainment. In Japan, a PC-98 version of the game was developed and released in 1995 by AMT Savan Corps, a merge of the company previously known as Arrow Micro-Techs Corp which published the previous games for Japanese computers. There was no FM-Towns version developed this time. In 1996, the Windows and Mac OS versions were also released in Japan by Electronic Arts Victor as Alone in the Dark 3: Ghosts in Town.

The official guide to the game ("Alone in the Dark 3: The Official Strategy Guide") was written by Steve Schwartz in cooperation with Infogrames and published by Prima Publishing.

Alone in the Dark 3 System Requirements

All games from the serie "Alone in the Dark"

View all games "Alone in the Dark"

(0) Comments on "Alone in the Dark 3 Full Version"