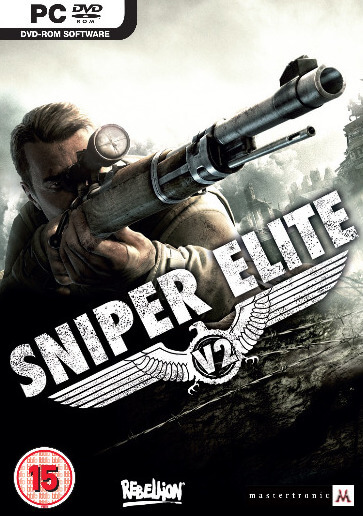 Sniper Elite V2 is a third-person tactical shooter stealth video game developed and published by Rebellion Developments in 2012. It is the sequel to its 2005 predecessor Sniper Elite, which takes place in the same timeframe and location—the Battle of Berlin in April–May 1945—but with an altered narrative. The game's story follows an American Office of Strategic Services officer who must capture or eliminate the scientists involved in the German V-2 rocket program while the Red Army invades. A prequel named Sniper Elite III was released in 2014. A remastered version for PlayStation 4, Xbox One, Microsoft Windows, and Nintendo Switch was released on May 14, 2019, with a release date in Japan on October 31, 2019.

Sniper Elite V2 is a third-person tactical shooter that emphasizes a less direct approach to combat, encouraging the player as a sniper to use stealth and keep distance from enemy soldiers. Many of the single player levels allow multiple routes for the players to take, including multistory buildings and side streets to get vantage points and avoid direct firefights. Set in World War II, the player character utilizes appropriate weapons for the era. The sniper rifle is the primary weapon throughout the game, though additional side arms are available including submachine guns and pistols, silenced or not depending on the situation. In addition to hand grenades, the player can deploy them as tripwire booby traps, land mines and dynamite. Binoculars can be used to tag enemies in view, displaying their position and movements to player. When using the sniper rifle however, certain elements can determine the outcome of a shot, taking realistic ballistics into consideration including wind direction and strength and bullet drop potentially altering the shot through the scope. Bullets can ricochet off surfaces or targets and strike others. In different postures such as crouching or lying down on the front can also steady a shot, however the player character also has the ability to take a deep breath to further steady a shot and from their perspective slow down time. Another ability is when the player character is spotted, their last movements and position to the enemy is shown as a white-outlined figure, potentially allowing the player to escape that area and avoid further detection and alarms being raised.

A major feature of V2 is the "X-Ray Kill Cam" where upon a successful and skilled shot will in slow motion follow the bullet from the sniper rifle to the target where upon impact will show an anatomically correct x-ray style reveal of the body part being hit and the damage the bullet causes to the organs and bones. Sniping can also be used to shoot the enemies' own grenades triggering an explosion. This method can also be used against military vehicles by targeting fuel tanks and valves. The game will also measure notable shots by briefly displaying distance and other factors like whether it was a head shot or moving target.

V2 supports online multiplayer where players engage in cooperative play in a series of game modes. Kill Tally is a mode where two players fend off increasingly numerous and difficult waves of enemy soldiers and vehicles in an enclosed environment with an infinite supply point of ammunition and explosives. While players can compete for higher kill counts, both must keep each other alive and work together. Bombing Run is a mission based mode where players must search the environment in order to repair a truck to escape before the entire area is bombed. The third mode is Overwatch where two players take different roles to complete an objective with one player as the operative who undertakes said objectives, armed with short range firearms and binoculars that can be used to tag enemies for the second player who takes the role of a sniper who covers the operative throughout. In addition to these separate game modes, missions from the single player campaign can also be played with two players. The Wii U version of the game however omits multiplayer, leaderboard and co-op modes.

The main character is Lieutenant Karl Fairburne (Tom Clarke-Hill), an American OSS officer and skilled sniper who is inserted into Berlin in 1945, during the final days of World War II. It references Operation Paperclip and its predecessor Operation Overcast, the plan by the US to recruit the scientists of Nazi Germany. Fairburne comes up against both Nazi and Soviet opponents as he tracks key individuals involved with the development of the V-2 ballistic missile.

The campaign begins with Fairburne sent into Berlin to first assassinate German Major-General Hans von Eisenberg who was attempting to defect to the Soviets. Shortly after, he is given the mission to eliminate Doctor Gunther Kreidl, a Nazi scientist who is being led out of the city in a convoy. After laying an ambush, Fairburne escapes with the doctor's personal documents revealing further information about the V-2 rocket program including the location of other scientists. As the only American within the region, he is sent to the outskirts of the city to infiltrate a V-2 production facility in search of another scientist, Dr. Schwaiger. While the scientist is absent, Fairburne learns that he originally made plans to defect to the United States, before sabotaging and escaping the facility. US intelligence then sends him into Opernplatz where the Soviets are in full invading force. As the Soviets and Germans engage one another, Fairburne slips by and saves Schwaiger from being executed by Nazi officers after his plans to defect were discovered. However, in the ensuing firefight, Schwaiger is mortally wounded and in his dying words states that "Wolff has a plan" and the unknown word "tabun". Following these events, Fairburne continues to track and eliminate the remaining scientists, assassinating Doctor Müller in his command tower during a series of bombing raids on the city.

With no location of the V-2 launching site, Fairburne infiltrates and searches the Soviet HQ. There he finds that documents revealing that tabun is actually a nerve gas that is to be carried by the V-2 rockets. As a last act of revenge the remaining scientist Doctor Wolff intends to launch them at London. With only the information that location is somewhere outside Berlin, Fairburne goes to Wolff's offices within the city to find more information. However, by the time he arrives the office has been already destroyed, yet Fairburne is able to find a ripped notebook and learns that Wolff is about to escape from an airfield. Fairburne retrieves a map detailing V-2 storage facilities and sets out to destroy the rockets before they can be launched. He arrives at the launch site with minutes until launch. After destroying the rocket, and with only Wolff left, Fairburne goes back to the Brandenburg Gate, where he had assassinated von Eisenberg few days earlier. Fairburne climbs on top of the structure and, as Wolff is about to escape in a car, shoots and kills Wolff, causing the car to lose control and flip over. Fairburne remarks that World War II is over but the Cold War has just begun, in which he has acted as the first soldier.