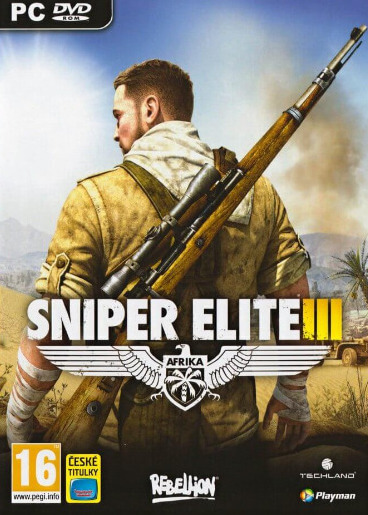 Sniper Elite III is a third-person tactical shooter stealth video game developed and published by Rebellion Developments. The game is a prequel to its 2012 predecessor Sniper Elite V2, and is the third installment in the Sniper Elite series.

Sniper Elite III is set around three years prior to the events of V2, following the exploits of Office of Strategic Services officer Karl Fairburne as he participates in the North African conflict during World War II, in which he learns of a secret wonder weapon programmed by the Nazi forces.

The game retains and builds on the mechanics of Sniper Elite V2. Players go through large battlefield maps based on the North African conflict.

The sniper rifle is the player's primary weapon, though additional weapons, including submachine guns and pistols, silenced or not depending on the situation, are available. In addition to hand grenades, the player can deploy tripwire booby traps, land mines and dynamite. Binoculars can be used to tag enemies, displaying their position and movements. The player-character must hold their breath to properly line up the shot. A red icon appears in the scope, marking the projected point of impact. There are weapon parts spread out all over the game, found when looting dead enemies, allowing players to customize their weapons in the predeployment menu; the menu also allows equipment loadouts.

Stealth mechanics have been reworked. An eye icon squints or opens to denote the player's level of detection by the enemy. Enemy soldiers will also have a circle meter over their heads to indicate alert status. Players are also forced to relocate periodically to prevent detection with a white ghost image to mark their last known position and the enemy will search a wider area. As in the previous game, loud sounds may be used to mask sniper shots.

A points system is instituted for actions such as stealth close-combat or sniper kills, with the points accumulating towards promotion to higher ranks. Players can go around the map to collect special reward items such as collectors' cards and unlock sniper nests. Journal pages also provide further backstory into the events of the game.

V2's X-Ray kill cam system is retained as well. Where the previous game only shows the body's internal structure at point of impact, the new game expands to visualize the rest of the cardiovascular, skeletal, and muscular systems. The player can still target vehicles, but now has a chance to shoot the engines and disable the vehicle.

Multiplayer in Sniper Elite III consists of 5 modes of competitive gameplay; Team deathmatch, Deathmatch, Distance King, No Cross and Capture the flag. There is a large selection of maps to play on with large open environments.

Fairburne's only hope of finding Vahlen is by rescuing a British informant inside Fort Rifugio previously held by the British during Operation Compass. Fairburne successfully infiltrates Fort Rifugio and frees the informant. The man, Brauer, shares intelligence about officers meeting at the Siwa Oasis in Western Egypt. Fairburne, whose sniping has earned him the label Wüstengeist (Desert Ghost) by the Germans, sneaks into the town and finds out that the officers plan to betray Vahlen to Hitler by giving him the general's personal diary in Berlin. Fairburne kills the officer tasked as the courier and steals the book, which details Vahlen's plans to conquer Europe when the Afrika Korps win in North Africa, with his base of operations somewhere in the Kasserine Pass.

Fairburne and Brauer infiltrate the base and discover from a secret movie reel that Project Seuche is a supertank codenamed Ratte. Tragically, Brauer is killed by a Tiger tank but Fairburne destroys it in revenge. He buries Brauer and takes a round from Brauer's gun. With the location of the Ratte production facility still unknown, Fairburne joins the LRDG in assaulting the German-controlled Pont du Fahs Airfield and finds a map leading to the facility, which is nestled inside the Mides canyon. He gets inside the complex and prepares satchel charges to collapse the base as well as destroy the Ratte prototype. To trigger the detonation, Fairburne puts an explosive on the Ratte's turret and drops a load of the supertank's massive shells on it. Vahlen is mortally injured trying to escape the hangar and Fairburne takes his Luger, puts Brauer's round in the chamber and kills Vahlen before escaping the base.

A voiceover by Fairburne during the end credits reveals that the intelligence he acquired on the Ratte enables the USAAF and the RAF to launch the Battle of the Ruhr. The effect of Operation Chastise on steel production forces the Germans to scrap work on the Ratte.