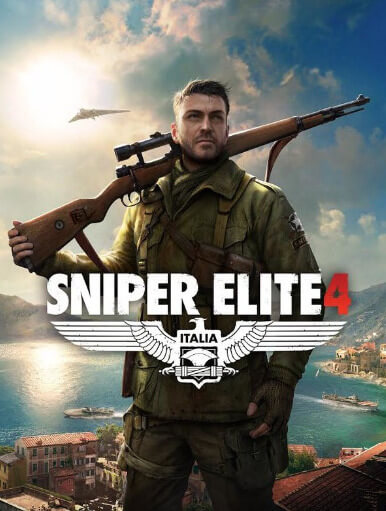 Sniper Elite 4 is a third-person tactical shooter stealth video game developed and published by Rebellion Developments. The sequel to Sniper Elite III, the game was released for Microsoft Windows, PlayStation 4 and Xbox One on 14 February 2017.

Sniper Elite 4 is a tactical shooter game with stealth elements, played from a third-person perspective. When the player kills an enemy using a sniper rifle from a long distance, the X-Ray kill cam system will activate, in which the game's camera follows the bullet from the sniper rifle to the target, and shows body parts, bones or internal body organs being broken or ruptured by the bullet. The system has also been expanded to include shrapnel kills, melee kills and stealth kills.

The game's artificial intelligence is improved, with enemies being able to react to the player's action more responsively. When an enemy is killed, other enemies will begin actively looking for them. The player is equipped with a pair of binoculars, which shows the player where the enemies are and what weapons they are carrying. The game features the "officers" rank. Killing the officer as early as possible will lead his army to retreat, while killing him by the end of a mission will significantly increase the level's difficulty. The player can place traps and use corpses as booby traps. The game also features night missions, in which the player can remove light sources to hide their presence.

Sniper Elite 4 is set in Italy in 1943, in the immediate aftermath of the events in Sniper Elite III. Upon learning about rumors of a new Nazi weapon, the Royal Navy sends a freighter, the Orchidea to the island of San Celini to investigate. The ship is quickly sunk by the new weapon – a radio guided anti-ship missile under the development of scientist Andreas Kessler and Heinz Böhm, a high ranking Nazi general that the Allies have little information about. SOE sniper Karl Fairburne (Tom Clarke-Hill) is sent to the island after the sinking and tasked with assassinating General Tobias Schmidt along with several other officers who oversaw the attack, filming it to use as propaganda. After eliminating Schmidt, Fairburne is sent to the village of Bitanti by OSS agent Jack Weaver to find Sofia "Angel" Di Rocco, leader of the local Partisan resistance group. Distrustful of the OSS who allowed her father to be kidnapped by the Nazis, Angel enlists Fairburne to destroy a railway gun at Regelino Viaduct in order to prove himself and convince the group to join forces. After blowing up the viaduct and destroying the gun, Fairburne is sent to investigate a dockyard that the Nazis are using to ship the weapon part out of and call in a bombing raid to destroy the facility.

Upon learning the Sicilian Mafia were helping disrupt operations at the dockyard to slow down the shipment of the weapon parts, Fairburne meets with kingpin Salavatore Dinelli who agrees to provide additional assistance after eliminating Piero Capo, leader of the local Black Brigade. Distrustful of the Mafia's intentions, the Partisans are reluctant to maintain the alliance. However when an SOE informant, Major Hans Dorfmann, reveals that Kessler is at the Magazzeno Facility where the missiles are assembled, Fairburne infiltrates the base to kidnap Kessler and steal his research notes. On interrogation, Kessler tells Angel her father is still alive, prompting the Partisans to depart to assault the town of Giovi Fiorini and find Böhm's confidant Major Klaus Rothbauer. Kessler then tells Fairburne that he is dying of liver cancer due to his heavy drinking and is of no use to the Nazis or the Allies as a result, and that the information given to Angel was a lie in order to lure the Partisans into a trap. Fairburne departs to Giovi Fiorini and eliminates Rothbauer, but the ensuing battle results in the Partisans being massacred.

Gathered intelligence allows the SOE to discover Böhm is aware of Operation Avalanche and has the constructed missiles sent to his fortress at Allagra, intending to both inflict enough damage on the fleet to prevent the invasion of Italy from being a success and attempting to kill General Dwight Eisenhower. Fairburne infiltrates the base, disabling each of the missiles. As he attempts to call in a bombing raid on the facility, Dorfmann appears with a captured Angel, revealing himself to be Böhm. Böhm executes Angel and quickly departs to his plane, intending to take off and personally carry out the attack on Eisenhower's ship. Fairburne gives chase and succeeds in shooting out the plane's engines before it can take off, destroying the plane and killing Böhm just as the Allied Lancaster bombers arrive to destroy the base. In the epilogue scene, Jack offers Karl a job in the OSS and Karl says he will think about it.

In June 2016, Sold Out described the game as a "big hitter", and that they expected the game to sell approximately 200,000 physical copies on its launch day in the United Kingdom.