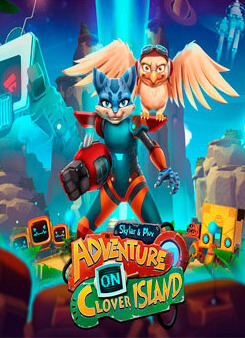 
Skylar & Plux: Adventure on Clover Island is a 3D platform video game by Right Nice Games and Grip Digital. It is inspired by games like Jak & Daxter and Ratchet & Clank. It was scheduled for January 2017 but released on 19 May 2017.

Player controls the titular character of Skylar in Third-person perspective. The game is set on eponymous Clover Island. There are various environments on the island. It includes tropical beaches, volcanic caverns, snowy mountain tops and merciless desert. Player can collect orange crystals that heals her health. Inhabitants of the island are Lo'a. They were captured by evil CRT and player can free them. When player finds a cage with Lo'a she can free it for required amount of orange crystals. There are multiple gadgets scattered across the world. She gets Mechanical arm in the beginning. It is used to fight CRT's minions and also for grappling hook. There is Jet-pack that allows her to get to higher places. Later she finds Time Orb that can slow time for a short period. In the end she finds Electromagnetic glove that can move metal objects which includes enemies and rockets. Player's main task is to find 3 fuse cores that are scattered across the island.

CRT, an artificial intelligence that wants to dominate the world created Skylar, a warrior cat with mechanical arm but Skylar decides to turn on him and escapes. She gets to Clover Island, where she meets an Owl named Plux who accompanies her on her journey. Together they try to prevent CRT from conquering Clover Island and turning it ito wasteland. They must find 3 fuse cores before CRT. Cores power the Siphon, an ancient Progenitor machine.

Zing.cz published a review made by 2 journalists. Ondřej Zeman received the game positively, praising the storytelling and gameplay. He also praised the design of the levels and technical execution of the game, but criticized lack of diverse enemies. Filip Němec was more critical. He criticised lack of innovation, and also noted some technical problems with the game. Another critical point was unutilized potential of main characters. Overall the game was scored at 6/10. The review concluded that Skylar and Plux is an above average 3D platformer that will take younger players by its gameplay and story.

Andrew Duncan of GameGrin gave 7.5/10. He praised the game's setting and remarked that it is reminiscent of Crash Bandicoot. He also praised the gameplay, but on the other hand noted the short gameplay will most likely discourage many players.