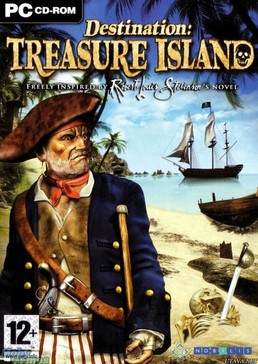 Destination: Treasure Island is an adventure game released in 2006. Developed by Kheops Studio and published by Nobilis. The game comes from the creators of The Secrets of Da Vinci, Return to Mysterious Island, Voyage and many more.

Jim Hawkings was only a child in R.L. Stevenson's novel, Treasure Island. But now, four years after the events in the novel, Jim has become a fully grown teenager. Treasure Island ends with Jim returning to England. He uses his share of the treasure to buy his mother a small estate. Jim has become an upstanding adventurous young man, attentive to those around him. His taste for adventure soon sets him on his travels again. With the money remaining, he buys a small boat and leaves England for the West Indies.

Captain Flint is a parrot. Faithful to the memory of its master, Captain Flint helps Jim in his quest and delivers useful information. The parrot shows up in different places on the island, always ready to make a sardonic but humorous comment on the player's actions.

Long John Silver is an acquaintance of Jim, and a colorful character. After he betrayed his fellow pirates, he managed to escape the Royal Guard and flee to a secret island with a good amount of the plunder.

The Pirates in the game are Morgan, Dick, Yellow Dog and others. All these men hate Long John, who was their leader and yet betrayed them to save his own skin. Rescued by a passing ship several years later, they have but one goal in life: find Long John to kill him.

Four years have passed since the end of the adventure recounted in Robert Louis Stevenson's novel. Jim Hawkins has become an upstanding adventurous young man, attentive to those around him. Imagine his surprise when, one morning, he sees a parrot enter his bedroom window : none other than Captain Flint, Long John's own companion. The bird brings him a message from his master. In the message the old pirate announces that he has buried a marvelous treasure on the secret isle where he retired : Emerald Island. Jim is going to have to hurry though. Pirates, old enemies of Long John, are on his trail.