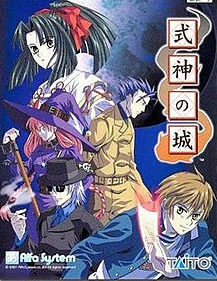 When localized, publisher XS Games re-titled the game as a sequel to Mobile Light Force, but in reality the games are unrelated. Mobile Light Force is known as Gunbird in Japan, and was not developed by Alfa System.

On May 8, 2017, Degica Games announced that they are localizing the series on their Twitter account. The first game will be released on Microsoft Windows via Steam on June 16.

When holding down the attack button, the player moves at slower speed, and all on-screen items are automatically retrieved. The player character is invulnerable when a special attack is in effect. When the player character is close to an enemy bullet, the points gained from destroying enemies and retrieving items is multiplied by a factor based on the distance between the bullet and the player character's center. The closer they are to the bullet, the higher the scoring. When destroying enemy in shikigami mode, the multiplier also applies to the number of items dropped by enemy and all items dropped by the enemy are automatically retrieved.

The Xbox release adds Practice mode, Gallery, and Replay mode, while the PlayStation 2 release adds Practice mode, Gallery, and Side Story modes. Windows includes I.R. mode and vertical screen layout from the arcade game. The North American and European releases of the game removed the screen rotation mode and all in-game plot.

In July 2005, a string of serial murders take place in Tokyo. All the victims are female and killed by external injury. The killings take place within 20 hours. On July 21, the 31st victim is found. The police force classify the case as special crime #568, and begin to seek investigators from occult sources. On July 23, there is a 32nd victim.

A comic version was written by Tooru Zekuu (aka Shinji Takano) and illustrated by Yuuna Takanagi, serialized in the monthly Magazine Z. Three volumes were published under Kodansha's Magazine Z KC label.