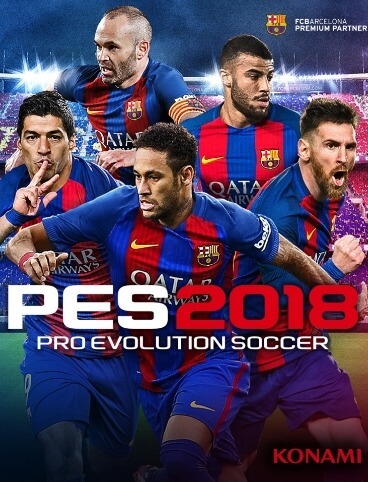 
Pro Evolution Soccer 2018 (abbreviated as PES 2018) is a sports video game developed and published by Konami for Microsoft Windows, PlayStation 3, PlayStation 4, Xbox 360 and Xbox One. The game is the 17th installment in the Pro Evolution Soccer series and was released worldwide in September 2017. This was the final PES game released for PlayStation 3 & Xbox 360 consoles and the last to feature UEFA Champions League, Europa League, and Super Cup licenses and the Borussia Dortmund partnership.

A mobile game version was released as PES 2018 Mobile for iOS and Android. It exceeded 150 million downloads, as of August 2018. PES 2018 was succeeded by Pro Evolution Soccer 2019.

Konami has kept with the theme of the previous release. They announced a special "Barcelona Edition", along with a pre-order bonus content for digital downloads and physical disc versions. Barcelona, Atlético Madrid, Borussia Dortmund, and Liverpool were confirmed as being licensed at E3 2017, FC Schalke 04, Valencia, Fulham, and the Brazil national football team are licensed as well. France national football team license was confirmed in the online beta.

Konami released a demo version of Pro Evolution Soccer 2018 for download on August 30, 2017 for PlayStation 3, PlayStation 4, Xbox 360, and Xbox One. The demo version includes limited stadiums, clubs, and feature sets. A Nintendo Switch version was not developed, but Konami have said they are open to the idea of porting future games in the series.

The first data pack, titled Data Pack 1, launched on 5 October 2017, and featured 117 new player face updates, ten of the latest boots, updated backboards in Master League for Barcelona, and over 3,000 new player thumbnails. The data pack 2.0 was released on November 15, 2017. This data pack added Arsenal's Emirates Stadium, the Estadio Nacional in Santiago, Chile, and new boots and new player faces; however, the update also removes licenses for Avaí, Fluminense, São Paulo and Vasco da Gama players, replacing them with generic players. The trailer for this was released on the same date as the release of the pack.