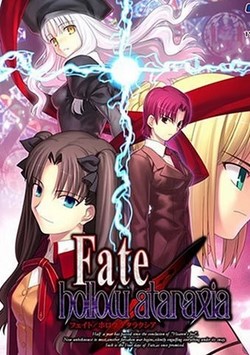 Fate/hollow ataraxiaa is a 2005 PC visual novel video game developed by Type-Moon, and the sequel to Fate/stay night. The word ataraxia in the title is a Greek term for tranquility, giving the title the combined meaning of "empty (or false) tranquility".

The game also was ported to PlayStation Vita, and it includes full-voice acting, among other enhancements. This version was released in Japan on November 27, 2014.

The plot of Fate/hollow ataraxia is based 6 months after the events of Fate/stay night. Like its preceding counterpart, the story is set in Fuyuki City. Bazett Fraga McRemitz, a member of the Mages' Association and a master in the Fifth Holy Grail War, wakes on the fourth day of the Fifth Holy Grail war with a new servant, Avenger, and no memory of what happened to her beforehand. She and Avenger set off to fight and win the Holy Grail War.

Meanwhile, Shirō Emiya lives a peaceful life with all of his friends from the Fifth Holy Grail War. After one of her experiments changes time and space, Rin Tohsaka leaves for the Mages' Association in England to fix things. The Servants sense a new danger while dark creatures appear soon afterward. Shirō, as a precaution, sets off to ensure nobody is in danger and instead finds himself frequently meeting a mysterious girl, Caren Ortensia.

Both Bazett and Shirō find themselves in a time loop that lasts four days, beginning of the fourth day of the Fifth Holy Grail War. Each time they die or survive four days, they always awake on the first day of the loop, aware of what has happened to them since the first time loop began. Determined to end the loop, Bazett, Avenger, and Shirō fight to discover the truth behind what is causing the endless four days.

There have been many sets of manga anthologies bases on the series produced by different companies and drawn by a multitude of different artists. The first volume of the earliest anthology series was released by Ichijinsha with the title Fate/Hollow Ataraxia Anthology Comic, on January 7, 2006 under their DNA Media Comics imprint; the Fifteenth volume in the series was released on August 25, 2008. Two anthology series were then released by Kadokawa, the first was the entitle Fate/hollow Ataraxia ~ Comic la carte and was released on January 10, 2006. The second Fate/hollow ataraxia Comic a la carte ~Happy Life hen~ was released on May 24, 2006. Another two anthology series were then released by Enterbrain, Fate/hollow ataraxia Anthology Comic was released between on January 30, 2006 and May 25, 2007 in nine volumes under their Magi-Cu Comics imprint. A 4-koma series was later published by Enterbrain between on December 25, 2007 and December 25, 2008 in six volumes. In 2013, a Fate/hollow ataraxia manga was illustrated by Type-Moon and Medori and published by Kadokawa.