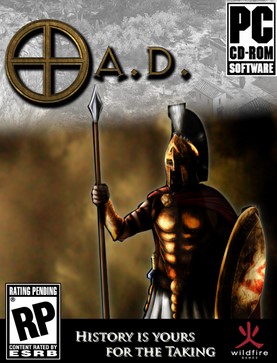 0 A.D. is a free and open-source, real-time strategy game under development by Wildfire Games. It is a historical war and economy game focusing on the years between 500 B.C. and 1 B.C. for the first part, and a planned second part for the years A.D. 1 to A.D. 500. The game is cross-platform, playable on Windows, OS X, FreeBSD, Linux, and OpenBSD. It aims to be entirely free and open-source, using the GPLv2+ license for the game engine and CC BY-SA for the game art.

0 A.D. features the real-time strategy gameplay components of building a base, training an army, combat, and technology research. The game is about economic development and warfare. The game will include multiple units and buildings specific to each civilization as well as both land and naval units.

Twelve different civilizations are available, which are each represented as they were at their apex. During the game, the player does not advance through time, but from village phase over town phase to city phase. The phases represent the sizes of settlements in history, and every phase unlocks new units, buildings and technologies.

The game features both a single-player and a multiplayer mode. In single-player mode, the player's opponents are controlled by the game. In both modes, players can choose between computer-generated random maps, hand-made scenarios, or skirmish maps as a hybrid form.

Multiplayer functionality is implemented using peer-to-peer networking without a central server. There is, however, a central lobby server which can be used to discover other players and set up a game. Players can also bypass the lobby and connect directly to each other using their IP address. When players connect to each other, one player's computer acts as a host. The host gathers commands from all players and distributes them. Sending just the players' commands reduces the amount of data that must be sent, which reduces delays due to slow network connections. However, all connected players must calculate the entire game state from those commands, which means that the game can only be as fast as the slowest computer in the game can handle.

The idea of 0 A.D. started around the year 2000. At the start, it was just a modding project that would make use of the Age of Empires engine. However, different modders bumped into the limitations of using a closed-source engine, so they decided to cooperate and make a game from scratch.

Between 2002 and 2009, the game was developed in private. Only people who were accepted to the team had access to the source code. During that time, a lot of artwork was made, but it was difficult to find programmers for a closed-source model. In 2009, the team re-evaluated the development process, and chose the open-source development model. Shortly after open-sourcing the code, the team began to release development versions of the game.

Since open-sourcing the game, it has seen a large amount of contributors, and is still under heavy development.

0 A.D. originally began as a comprehensive total conversion mod concept for Age of Empires II: The Age of Kings in June 2001. With limited design capabilities, the team soon turned to trying to create a full independent game based on their ideas. The game has been in development since 2000, with actual work starting in 2003.

In November 2008, the developers confirmed that they would soon be releasing the project as open-source. On 10 July 2009, Wildfire Games released source code for 0 A.D. under the GPL 2+, and made the art content available under the CC BY-SA.

There were about ten to fifteen people working on 0 A.D. around 23 March 2010, but since development started over 100 people have contributed.

On 5 September 2013, an Indiegogo crowdfunding campaign was started with a US$160,000 goal. They raised a total of US$33,251 to be used to hire a programmer. The majority of the finances are managed by the Software in the Public Interest organisation.

There is no official release date set for the finished version.