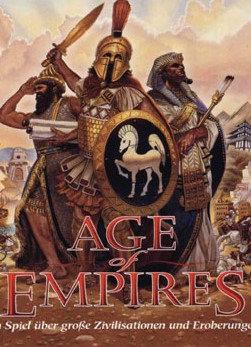 Age of Empires (AoE) is a history-based real-time strategy video game developed by Ensemble Studios and published by Microsoft, and the first game in the Age of Empires series. The game uses the Genie Engine, a 2D sprite-based game engine. The game allows the user to act as the leader of an ancient civilization by advancing it through four ages (the Stone, Tool, Bronze, and Iron Ages), gaining access to new and improved units with each advance.

Age of Empires requires the player to develop a civilization from a handful of hunter-gatherers to an expansive Iron Age Empire. To assure victory, the player must gather resources in order to pay for new units, buildings and more advanced technology. Resources must be preserved, as no new resources become available as the game progresses; for example, trees that are cut down will not grow back.

A major component of the game is the advancement through four ages. These are the Stone Age (Mesolithic/Nomad/Paleolithic), the Tool Age (Neolithic/Chalcolithic), the Bronze Age and the Iron Age. Advancement between ages is researched at the Town Center, and each advancement brings the player new technologies, weapons, and units.

The game features four single-player campaigns in which the player is required to complete specific objectives. Campaigns are a collection of scenarios which are completed in a linear fashion. The campaigns follow the history of the Egyptian, Greek, Babylonian and Yamato civilizations; there is also a complete campaign specially made for the demo version that takes place in the Hittite Empire. Aside from the campaigns, there is a game mode called "random map", in which a different map is generated for each new game. Variations of random map, such as the resource-heavy "death match", are also available.

Age of Empires facilitated online and network play with up to 8 people simultaneously. Because the network play is less sophisticated than that of modern games, lag and disconnections often occur. Until June 19, 2006, multiplayer gameplay was supported by Microsoft Gaming Zone. At that point, the Zone abandoned support of most CD-ROM games, including Age of Empires and Age of Empires II: The Age of Kings.

The creation of user-made scenarios or series of scenarios (campaigns) for the game was made possible using the Scenario Builder. This tool is simpler and easier to learn than comparable editors used in more modern games, but it has fewer capabilities as a result. Ensemble Studios used the Scenario Builder to make the single-player campaigns which shipped with the retail game. Various unofficial sites exist where custom scenarios can be submitted and downloaded. In late 2005, it was discovered that by modifying various data files, units present in the beta versions of the game could be made available in the editor. Some obscure units include a spaceship and a hero that changes ownership when units move near it. Through data editing, the rules of unit placement can also be modified. This allows units to be placed on any terrain and on top of other units, which creates new possibilities for design. Other significant discoveries include new terrain templates, a mode to triple each unit's hitpoints and a tool to edit map sizes.

Players choose to play as one of 12 civilizations. The civilizations are sorted into four distinct architectural styles, based on East Asian, Mesopotamian, Egyptian and Greek architecture, which determine their in-game appearance.

Technology is researched at specific buildings, to which they are generally related; for example, religious research is done in temples and improved armor is researched in the storage pit. Technological advances come in many categories, such as military upgrades (better arms and armor for units), economic upgrades (increasing the efficiency of resource gathering), religious upgrades (faster conversion rates and more abilities for priests) and infrastructure upgrades (stronger fortifications and more resilient buildings). As basic technology research is completed, more advanced technologies may become available. Some technologies are not available to certain civilizations.

Technology plays a very important role in the strategy of the game. As a civilization progresses through the ages, technology becomes more and more expensive, which makes collecting the necessary resources to research them difficult. As a consequence, balancing the workforce of villagers across the various resources can make the difference between victory and defeat.