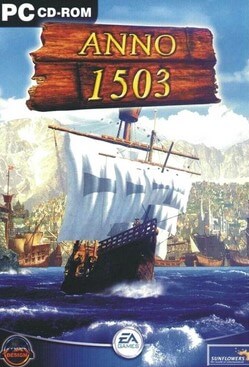 Anno 1503: The New World (released as 1503 A.D.: The New World in North America) is a 2002 construction and management simulation developed by Max Design and published by Sunflowers Interactive. It's part of the Anno series, and is the direct sequel to Anno 1602, the most commercially successful German game ever by 2002. Anno 1503 revolves around building and maintaining a 16th-century colony in the New World.

Like its predecessor, the game was a commercial hit in the German market, and became its best-selling computer title of 2002. By 2006, the game's global sales had reached 2 million units, with over 750,000 sold in German-speaking territories. It was followed by an expansion pack, Treasures, Monsters & Pirates, and a sequel: Anno 1701.

Anno 1503 begins with the player in control of a ship filled with men and material searching for an island to settle. After finding a suitable site city building begins. Resources begin as food and cloth, but progress into more complicated and different goods. Eventually, citizens become Aristocrats, and require at least ten different goods and numerous services, such as access to a large church or a bathhouse. The game is constructed around one human player and three computers. Like Anno 1602, the computers are progressive, meaning that they advance along with the human players. The computer players also have adjustable personalities, which the player customizes before the beginning of a game. Each different player, human or computer, is represented by a color.

The economy in Anno 1503 is built on providing different goods to colonist citizens. It begins with the creation of cheap goods, and progresses in civilization levels throughout the game leading to more advanced goods. Since the game is built on different levels of civilizations (pioneer, settler, citizen, merchant, aristocrat), each civilization level requires more goods and more balancing skills and finesse.

Technology of Anno 1503 begins on the pioneer level. After giving citizens basic goods like food, cloth, and alcohol, they develop into Settlers, the second civilization level. The second levels allows the player's settlers to build more advanced buildings; however, settlers require more goods to stay alive. Buildings in the game do not necessarily have a specific function for the player, but have an implied or under effective function for settlers in the game. Building abilities are amplified with expansion, meaning larger populations have more effective building powers.

The military form of this game is more complex than that of Anno 1602. The game has more than seven different types of units as opposed to Anno 1602 with only four. Thus, during battles, the game experience becomes more intense as deploying different units becomes key in strategy for winning a battle.

The buildings in the game are more extensive than those of Anno 1602. This is mainly because the game play area and islands are many times bigger than that of 1602. Thus, it makes it possible to have many more plantations and diversity of farm houses. With the original houses and farms featured in the previous game, this game also has many more extensive farms for gems, silk, whale blubber, lamp oil, medicinal herbs, hops, wine, indigo, coal, hides, leather and salt, increasing gameplay difficulty. Building and house graphics are improved over the previous game.

(Above Right): The packaging art for Electronic Arts Anno 1503, was awarded to freelance Illustrator Marc Ericksen, who incorporated a montage of Conquistador imagery involving armored soldiers, ships, and Caribbean style imagery to set the stage for the gameplay.