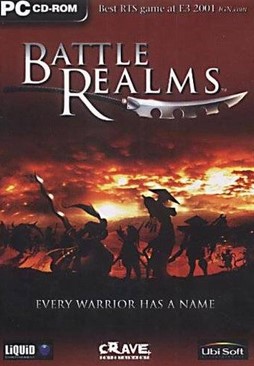 Battle Realms' gameplay is like many other real-time strategy games. There are several factions which all have various types of available structures and units to produce. Unlike other real-time strategy games though, the basic worker units (peasants), which are used for resource gathering and construction, also act as the base unit to be upgraded into military units. Thus, military buildings in Battle Realms are used for transforming and upgrading units rather than producing them directly.

Peasants gather three resources in the game: rice, water and horses. Horses are war units that can be used to combine with other military units i.e riding or can be turned into pack horses when assigned for peasants. Only one type of builder unit is required. Peasants are the only units that can be produced outright. Most of the buildings available are training structures where peasants are trained to become other units.

All factions start off with three basic training structures which produce units along different paths of warfare, such as melee or ranged combat. In most cases, units can be trained in three different structures to produce more highly skilled infantry or Battle Gears (commonly abbreviated as BGs) to improve their combat ability. This allows lower tiered units to defeat higher tier units, which they could not normally defeat. BGs also allow the player to further define the role of a unit, such as damage absorption, building destruction, or reconnaissance.

Another key element of Battle Realms is the Yin/Yang system. Each army obtains points of Yin or Yang when in combat, depending on their moral alliance to the forces of light or darkness. Hero units, or Zen Masters, require Yin/Yang to be summoned and increase their damage. Yin and Yang are also used by structures in the faction's base for military upgrades. The rate of Yin/Yang growth depends on the strength and flair of the army and how far they are from the main base.

In Kenji's Journey, the player may choose which territories he or she wishes to attack first. (Otomo, his lieutenant, gives you the options.) When Kenji returns from Malcomson, he must decide whether to rebirth the Dragon Clan and save the peasants honor with righteousness or take up reigns in his brother's and his father, Lord Oja's, footsteps and lead the Serpent Clan. Taking specific territories might give benefits, and other Zen Masters may join Kenji. Later on, the player can summon these Zen Masters from the Keep. The story focuses on an artifact Called Tarrant's Orb/Orb of the Serpent which Kenji, the NPC Clans, and The Wolf and Lotus Clans are seeking out. Kenji must get to the Orb before them.