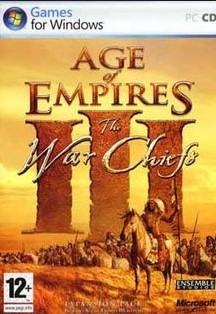 There are no major changes to the mechanics to Age of Empires III - players are still expected to gather resources, build armies and send them to attack opponents. Instead, there are a number of new concepts introduced, whilst existing concepts have been expanded.

While the Aztecs have a home city, the Iroquois and Sioux have five members of the Tribal Council: the Chief, the War Leader, the Shaman, the Wise Woman, and the Messenger. They all offer different units, supports, and improvements. The tribal council is present in the game when a native civilization advances in age (replacing the politician system of the European civilizations); the player can select to promote a candidate to the Tribal Council and this confers a bonus on the player. The candidates offer higher bonuses at later ages. Typically the type of bonus remains the same (extra units, bonus resources) and new candidates become available at higher home city levels.

Other additions to the game include new minor native tribes: the expansion increases the original game's 12 tribes to 16. The Huron replaced the Iroquois, the Cheyenne replaced the Lakota (Sioux) and the Zapotec replaced the Aztec. Other new tribes include the Klamath, the Apache, the Navajo and the Mapuche.

Additionally, each Native Civilization has its share of unique technologies. There is one unique technology per building except for the Sioux teepee, and the technologies' effects range from delivering shipments of resources or units to upgrading unit capabilities.

European colonies have a new option open to them in the Industrial age; instead of advancing to the Imperial age, they can revolt from the home nation and found their own country. The initial cost of revolting is cheaper than advancing to the Imperial age, but the nation's economy will stagnate because all settlers will turn into militia and no new ones can be built (except Coureur des Bois from a Cree Village). Resources can continue to be delivered from pre-constructed ships, tributed resources, trading posts, factories and for the Dutch, banks. A new nation may not upgrade units to the Imperial Age.

Another new feature is the use of stealth. This enables certain units to remain undetected by most enemy units and buildings. All native civilizations have a unit that can use stealth (this cannot be activated when enemy units are nearby). For the Europeans, there are spies that can be sent from the home city or recruited from the church. Spies are particularly effective against explorers and war chiefs due to their bonus attack. They all share the stealth ability, as do other miscellaneous units (ninja, native scouts, etc.). When certain enemy soldiers are near the invisible unit, the unit will be revealed and vulnerable to attack. Stealth units also become visible when they attack.

The campaign, which is 15 missions long, includes the Black family in a more historical setting. The first act, Fire, follows Nathaniel Black (John Black's son and Amelia Black's father) as he spends the family's entire fortune supporting the American Revolution. The second act, Shadow, follows Amelia Black's son, Chayton Black, and his actions in the Black Hills during Red Cloud's War and Great Sioux War. The home city for both acts is the Black Family Estate.

(0) Comments on "Age of Empires III: The WarChiefs Full Version"