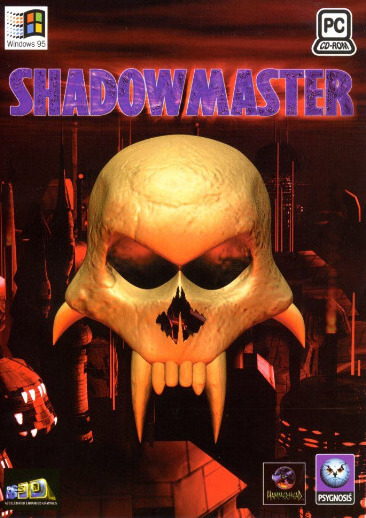 Shadow Master is a video game developed by HammerHead and published by Psygnosis for the PlayStation and Microsoft Windows. It was released for the PlayStation video game console in January 1998 in Europe, and on February 24, 1998 in North America. The PC version was released on March 25, 1998 in North America, and in 1998 in Europe.

Shadow Master is a first-person shooter, set in a science fiction universe. The player takes control of a futuristic and heavily armed ATV to traverse each level, combat aliens, and complete level objectives. Before each mission, the player is briefed by 'strategic command' on their mission objectives. The player is then brought into the level, which they can explore. The vehicle the player uses is controlled with either the D-Pad and shoulder buttons, or the two analog sticks in the PlayStation version. In the PC version, the mouse and keyboard or joystick can be used for movement. The player's vehicle has a certain amount of health and shields. If these drop below zero, a game over results. A radar is displayed to show the relative positions of enemies to the player character. The vehicle is also armed with many weapons, such as lasers, cannons, machine guns, missiles, grenade launchers and rail guns. Some have unlimited ammunition but are limited by an overheat meter which prevents constant use of the weapon, while others have a limited supply of ammunition but are much more effective and not limited by overheating.

The game contains sixteen levels spread across seven different worlds to explore. The levels are completed when all objectives in the current mission have been completed. Each level comes with its own complement of enemies, with many of them resembling creatures from Earth such as apes or wasps, but are mechanoid instead of living organisms. There are also many alien creatures to contend with as well, with some henchmen being made in the image of the Shadow Master himself. The creatures drop items the player can use when they are destroyed, such as health crystals, ammunition, weapons, power-ups and upgrades. These dropped items stay active for a short period and disappear if not picked up.

The visual design concepts for the game were done by Rodney Matthews.

Shadow Master received mixed reviews from critics, with the PlayStation version getting higher scores overall. GameRankings has listed both the PlayStation version and PC version, with aggregate scores of 65.6% (PS) and 58.5% (PC). GameSpot gave the PlayStation version of the game a 7.2 out of 10 'Good' rating, stating that "Hackneyed plot aside, this game is actually pretty decent for a 3D shooter." praising its visuals, especially its art direction stating "The resulting landscapes and creatures differ from anything you've seen before.", and the sheer number of enemies. IGN gave the game a lower score of 4 out of 10, citing the game's controls to be "sloppy", saying that "...piloting your vehicle is ugly. If that's not disheartening, try aiming at a gun turret behind a wall and getting stuck in a corner."

Next Generation reviewed the PlayStation version of the game, rating it one star out of five, and stated that "Is this playable? Yes. Desirable? No. Everything about Shadow Master screams 'second rate.' Pass on it and wait for the Psygnosis 'A' team to publish its next title."

The PC version of the game garnered harsher scores, with GameSpot giving the version a lower 4.7 out of 10 'Poor' rating, giving praise to the same areas as the PlayStation version, but cited issues with the multiplayer portion of the game, noting that "Our Righteous 3D machine chugged along at an unplayable pace, even with low-resolution, flat-shaded graphics enabled. The Obsidian system ran just as slowly, which made the two-player session boring, frustrating, and as far from fun as possible.".