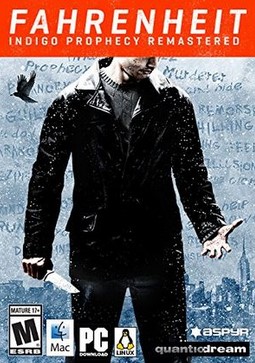 
Fahrenheit (known as Indigo Prophecy in North America) is a cinematic interactive drama action-adventure video game developed by Quantic Dream and published by Atari, Inc. for the PlayStation 2 and Xbox on September 16, 2005. The director's cut and uncut versions were later released for Microsoft Windows. Fahrenheit sold over 1 million copies and has won several awards. On December 4, 2007, Atari released the game for Xbox 360 through Xbox Originals.

On November 8, 2011, Quantic Dream released the game uncensored for PC through GOG.com. A remastered version of the game, entitled Fahrenheit: Indigo Prophecy Remastered, was developed and published by Aspyr in January 2015 for Microsoft Windows, OS X, Linux and iOS. A port for the PlayStation 4, which was developed by International Software Development Group at Sony Interactive Entertainment, was released on August 9, 2016 via PlayStation Network.

Fahrenheit is a paranormal thriller, in which New York City experiences a series of mysterious murders that follow the same pattern; ordinary people become possessed and kill strangers in public. The main characters of the story must uncover the supernatural forces behind these crimes. Publicity was generated from the developer's preference of game genre labeling; branding it as the first "interactive drama" rather than an adventure or third-person action title. The game features motion captured animation as well as branching story lines, split screen cameras and an interface designed to be intuitive and realistic. Event triggers in the game are also mainly time-based, as opposed to the more common player-initiated progression found in most games.

Console versions of the game eschew most of the traditional methods of control, making minimal use of the face buttons on the controller, instead using the twin analog sticks for almost all player actions. The left stick controls movement of the character, while the right is used for context-sensitive actions. For instance, when Lucas, one of the protagonists, approaches his table at the diner in the opening scene, pressing the stick in one direction may cause him to take a seat, another makes him examine his bill, and a third lets him pick up his drink and take a sip.

The available options are displayed with simple diagrams at the top of the screen. More complex motions, such as climbing a fence or spinning a yo-yo "around the world" fashion, require controller motions designed to replicate the actual action being undertaken by the character. During the tutorial of the game, David Cage instructs the player to move the thumb-stick slowly when opening a door, to maximize immersion, making it clear the prevalent use of thumb-sticks in the game was intended to increase immersion. On the rare occasions in which the face buttons are used, the buttons never directly control character actions; rather, the buttons are used to interact with menus and the user interface, such as changing between characters, navigating menus in computer systems, and displaying the "mental health" of the character. In the Microsoft Windows version of the game, control is via the keyboard and mouse, with key movements and mouse gestures used in conjunction in lieu of analog control sticks, although Microsoft Windows gamepads with analog sticks are also supported.

A major component of the game is made up of large action set pieces, which are completely scripted, but which require reflexes to complete. During these scenes, two circular diagrams with colored segments are superimposed over the full motion video, each one corresponding to one of the analog sticks. The diagrams depict sequences of control inputs, which the player must mimic in order to maneuver the character out of danger, similar to the quick time event sequences in Shenmue. These action events are the points in which the game story may fork, choosing different options will result in different outcomes. Eventually, however, the stories will reconvene, as many dialog trees do. The game also requires feats of endurance, involving the alternate pressing of the left and right shoulder buttons as rapidly as possible. These left and right trigger sequences are generally used to evoke (and cause) physical exertion, and occur during such gameplay events as characters weightlifting or trying to force something open.

The player is placed in control of, at different times, Lucas Kane, NYPD officers Lieutenant Carla Valenti and Sergeant Tyler Miles, and occasionally, Fr. Markus Kane, Lucas's brother. The game provides each character with a "Mental Health" meter, which ranges from full ("Neutral") to empty ("Wrecked"), and which represents the character's mental stability. Many of the game's events (such as the opening, where Lucas discovers he has just murdered a total stranger for no apparent reason) subtract points from the meter, but everyday or habitual activities (such as eating, urinating or receiving good news) will add points, as will scenarios in which the character makes a revealing discovery or action that helps him or her in some substantial way. An empty Sanity meter leads to an end depending on the character and level, like a suicide or mental breakdown, and subsequently a Game Over.

Finally, a conversation system is also implemented into the game, with the right analog stick used to choose dialog options in much the same way as it is used to control actions. When conversing with certain non-player characters (NPCs), there is often a "Suspicion" meter, which is affected by the player's choices, indicating how suspicious the character Lucas is conversing with is becoming, e.g. failing to give convincing answers when being interrogated by police. In these situations, if the player does not make a choice within the allotted time limit, the game will make a default choice for him, or else the conversation is abruptly ended. It is impossible to leave a conversation without the minimum amount of information necessary for the characters to progress in the game, and if one continually strays too far from the topic's intended resolution, the game will automatically direct the conversation back.