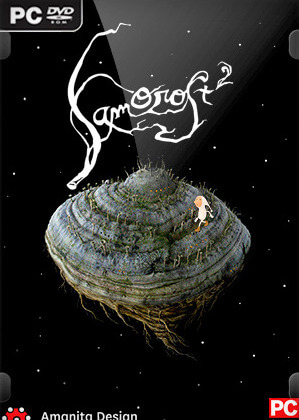 Samorost 2 is a puzzle point-and-click adventure game developed by Amanita Design. Released for Microsoft Windows, OS X and Linux on 8 December 2005, the game is the second video game title in the Samorost series and the sequel to Samorost.

Together with his freelance Flash and web design agency, Amanita Design, Dvorský produced a sequel, Samorost 2. In Samorost 2, the gnome goes on a longer quest to save his kidnapped dog and return safely home. The first chapter of this game (comprising the first 4 levels) can be played online for free. The second chapter (with 3 levels) is only playable in the full version, which cost $6.90 until the price was later lowered to $5.00.

The Samorost 2 Soundtrack is composed, written, arranged and produced by Tomáš Dvořák for Amanita Design, the soundtrack was released on December 8, 2005 in digital format and on June 5, 2006 on cd. The album includes 12 tracks.

Samorost 2 was released in several physical and digital formats.

International release - includes cd with Win and Mac versions of the game and the soundtrack (CD-DA and mp3 files). Packaged in digipak. Was released on 5 June 2006.

Collector's Edition (Russian) - includes cd with Russian version of the game, cd with soundtrack and artbook with some sketches, informations, etc. Packaged in DVD-box. Was released on 21 November 2008.

Amanita Design Store - includes Win, Mac and Linux versions of the game and soundtrack in mp3 format. Was released on 8 December 2005.

Critical reviews were generally positive. The game was praised for its visuals and simple gameplay.

Samorost 2 has won several awards. These include a 2007 Webby in the games category; Independent Games Festival award 2007 for Best Web Browser Game; Best Web-Work Award at the Seoul Net Festival in 2006. The soundtrack won the Original Sound category at the Flashforward Film Festival 2006. The game was also nominated in 3 categories (Best Game, Best New Character and Best Visual Effects) in the GameShadow Innovation in Games Awards.

The sequel Samorost 3 has been released in 2016 on multiple platforms (PC / Android /IOS) .