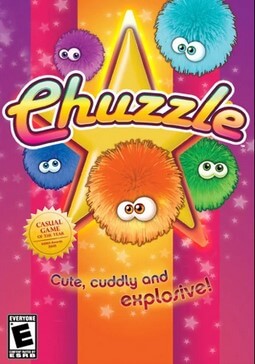 The game follows the protagonist Chuchel, a dust bunny-like creature, as he tries to retrieve a cherry stolen by a giant one early morning, with his all-in-one best friend, enemy and pet Kekel either helping or hindering him on the way. The game is structured into short, loosely connected episodes of Chuchel's struggles to retrieve and keep the cherry; the episodic nature is emphasized by some levels showing the title.

In the last level, it is revealed that the giant hand teasing Chuchel with the cherry is in fact a larger Chuchel-like creature; it swallows Chuchel and Kekel who retrieve the cherry from its stomach, and climb up to its brain to switch it from "grumpy" to "happy". The now-happy giant then delivers Chuchel and Kekel back to their home, where they finally split and eat the cherry, only to get a huge pile brought by the giant, who then starts chasing a large pear carried by an even larger hand.

The game consists of 30 levels. The player controls the eponymous Chuchel whose task is to retrieve a cherry. Levels are different and most of them are played as point-and-click adventure but some consist of minigames including spoofs of Pac-Man, Flappy Bird, Tetris, Space Invaders, and Donkey Kong. When Chuchel retrieves the Cherry, antagonist Chuchel shows up and steals it. Chuchel is aided by his pet Kekel who helps him to get the Cherry.

The game was developed by Amanita Design. Designer Jaromír Plachý started to work on the game after he finished Botanicula in 2012. Plachý stated that he wanted to make an interactive cartoon with funny animation. He came up with the character of Chuchel (the word "chuchel" does not "officially" exist, but it's an apparent combination of two similar Czech words "chumel" (clamp or tangle) and "chuchvalec" (tangled mass or clot)) when he decided to draw the first thing that comes to his mind. Plachý then designed environments and turned them into actual levels.

On December 20, 2018, Amanita Design released an update for the game changing Chuchel's body color to orange, in response to the character being misinterpreted by some reactions as a racist stereotype called Blackface. Some levels were also slightly changed to match Chuchel's new colour.