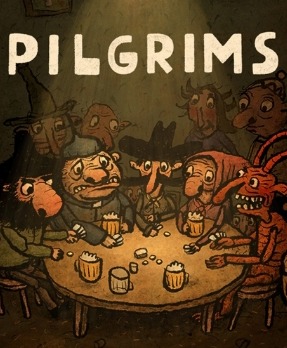 Pilgrims is a 2019 adventure game by Amanita Design. It was released on 6 October 2019 without prior announcement. The game was released for Windows and iOS. Pilgrims is one of the first games distributed through Apple Arcade.

The game was developed by a team led by Jakub Dvorský. It was in development for two years. The idea for the game came from a card mini-game found in Samorost 3.

Pilgrims is a Point-and-click Adventure game. The player controls an adventurer who wants to take a boat ride, but the owner of the boat refuses to take him until he catches a bird for her. He is eventually joined by other characters (a crone, a devil, a robber and a princess). Each of them has a problem that the player has to solve in order to get the elusive bird, but also an ability to help him with his quest.

The world is made up of a collection of scenes which can be traversed using a world map. While looking at a scene, the player can click on objects to pick them up. Objects that have been collected, as well as characters who have joined the player, are represented by a deck of cards under the scene view. Cards can be dragged from the deck onto the scene in order to use them. For several problems the player can apply multiple solutions by choosing another character or another item. So the story can differ somewhat in different playthroughs.

Pilgrims was released to positive reviews from critics. Games.cz gave it 8/10, stating that it is a nice walk through the World of Czech fairy tales an Humor.  Rocket, Paper, Shotgun praised Game's concept and replayability. Adventure Gamers gave Pilgrims Excellent rating.