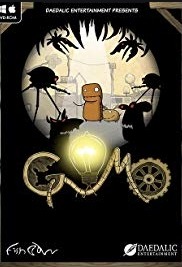 Gomo is a video game developed by Slovak company Fishcow Studio. It is a Point-and-click adventure game.

The game is a typical point-and-click adventure game with hand-drawn graphics. It also includes some puzzles to solve. The game is inspired by Amanita Design titles such as Machinarium. It also means that the story is told without words.

The game follows Gomo whose dog Dingo is kidnapped by an alien. The alien demands a mystical red crystal artifact that is imbued with power.

The game received middling reviews. It holds 50% on Metacritic. The game was criticised for its length, low difficulty, story and a low diversity of worlds. On the other hand, it was praised for its visuals.