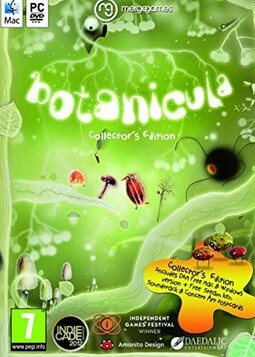 Botanicula is a point-and-click adventure game developed by Amanita Design. The game was released on April 19, 2012, for Microsoft Windows, Mac OS X and Linux. The game was later ported to iOS and Android.

Like the previous games from Amanita Design, in Botanicula the player controls a protagonist (or multiple protagonists) while exploring the environment, solving puzzles and collecting items that are required for the obstacles that come in their way. The player is able to interact with other creatures and find easter eggs that are present in the lush environment. Like Machinarium, the game has no spoken or written dialogue.

Botanicula follows the adventure of five botanical creatures (named Mr. Lantern, Mr. Twig, Mr. Poppy Head, Mr. Feather and Mrs. Mushroom) who are trying to save the last seed of their home tree from evil parasitic creatures that have infested their home.

The game received overwhelmingly positive reviews from critics. It was praised for its music and visuals, as well as gameplay. However, other reviews noted a lack of replay value.

Botanicula won the 14th annual award in 'Excellence in Audio' at Independent Games Festival 2012. The game was also a showcased nominee and received the Story/World Design award at IndieCade (the International Festival of Independent Games) in 2012.  Botanicula also won a European Games Award 2012 in the category Best European Adventure Game. Botanicula was elected in the Booom competition as the Best Czech video game of 2012. The game also appeared on Anifilm in 2012 where it was given the Czech Video Game of the Year Award for artistic contribution to Czech video game output.