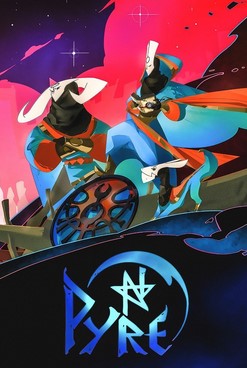 Pyre is an action role-playing sports video game developed by Supergiant Games for Microsoft Windows, Linux, macOS and PlayStation 4, released on July 25, 2017. The macOS version was released on August 3, 2017.

The game takes place in a high fantasy setting. The story is told through on-screen narrative passages that include a hyperlink-type system used by the player-character to explore the story further. In addition to guiding the exiles during "Rites" which resemble a sports game, the Reader must determine how to help support or improve the party, by performing activities such as scavenging for supplies, learning more of the world's lore, or mentoring the exiles to improve their abilities.

Through the land, the party encounters other groups of exiles, which starts the Rites, the game's combat system which was described by Marty Silva of IGN as a mix of Defense of the Ancients, Rocket League, and Supergiant's previous game, Transistor. Rites takes place on a field with two columns of flame, or pyres, at opposite ends and the three exiles facing off against three opponents on a top-down perspective. Each team attempts to destroy the opposing pyre by launching a single glowing orb at it, which steadily whittles away at its health. The player only controls one character at a time by passing the orb among the three. A character traveling with the orb is vulnerable to being temporarily banished from the Rites if an enemy's aura touches them, which would drop the orb at their feet. The different characters have various skills that aid them in the Rites, such as dashes or long-range projectiles. Each of the player's characters also have different passive abilities, such as one that can move quickly about this arena but does little damage to the opponent's pyre, while another is slow and bulky, but can do the greatest damage.

The game includes a local multiplayer mode which allows two players controlling separate teams to compete. Supergiant was unsure if they would be able to include online multiplayer in time for the game's launch and opted to keep this mode to local as well as player-versus-computer matches for release.

The concept of Pyre came out from prototyping several game ideas by Supergiant Games, according to creative director Greg Kasavin, eventually coming to the theme of "what happens when you face defeat, and have to come back from it the next day, look your friends in the face, look yourself in the mirror, and deal with the consequences of the decisions you made". In trying to devise gameplay around the nature of failure, they came to see the use of sports as a metaphor for combat, featuring non-violent gameplay but consequences of losing. To connect these battles, the developers came onto the use of a narrative idea to have the player guide their party across an overworld, making decisions on where to go based on available resources and timing. They worked through prototyping to adjust how this part of the game would affect the Rites, adjusting the interaction of these two gameplay systems to get an appropriate balance. Kasavin stated they were worried that as some aspects of the game may be confusing, players that were not invested in the game's narrative would not come to appreciate some of these systems, and that if they were providing enough variation in the game to retain the player's interest over time.

The game was announced in April 201 and first demonstrated in playable form at the 2016 Penny Arcade Expo shortly afterwards. Kasavin and his team used this PAX testing to help evaluate how they had set up some of these gameplay systems. The game was released on July 25, 2017.